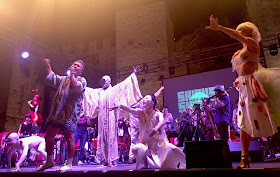 Shibusashirazu is the quintessential “live” ensemble. Founded in Tokyo in 1989 by bassist Daisuke Fuwa, the band consists of a variable number of rotating musicians, usually around twenty, plus dancers and various performers. The Orchestra’s activity is well documented on a series of CDs and DVDs, and even if the music is still very enjoyable on its own, it’s the live dimension that really amplifies the impact and originality of this project. Scenography has a very important role, with textiles, costumes, video projections, live painting and flying inflatable creatures being an integral part of their shows.

Last Sunday in Prato, in a beautiful square in front of the medieval town castle, they presented a typical performance, with all the above ingredients in full display, and maybe to those who knew them from records or videos there weren’t many surprises in the overall structure or in the compositions played – but seeing them live has proved to be a surprising, electrifying experience.

Firmly grounded in the tradition of the most original free jazz large bands (not too far in spirit from the Sun Ra Arkestra), musically they covered much ground, from blues and funk to balkan tinged numbers, from mildly saccharine j-pop ballads to straight-ahead rock anthems. The spirit was unequivocally that of free jazz though, with a chaotic, frenetic activity on stage, and the solos, especially from the woodwinds, were usually loud, furious excursions often verging on noise. The instrumental quality of the ensemble was impeccable, and Fuwa conducted it with exquisite aplomb and a taste for tight exchanges and infectious grooves, often dividing the ensemble in various instrumental combinations, giving space to the soloists yet never forgetting the full big band sound and orchestral capabilities of the group.

Music was only a part of the show though, and one of the most fascinating aspects was the role of the dancers and performers that populated the stage. Along the half-naked singer and master of ceremonies, there were three Butoh dancers painted white from head to toes, two girls in kimonos waving oversized plastic bananas in unison, another blonde dancer in a bra and skirt adorned with flowers, plus a samurai-style performer that mimicked karate moves and a young girl in a sheep costume. And then the final touch: a giant inflatable silver dragon the appeared mid-show from the back of the stage and traversed the packed square, flying over the audience heads.

Sounds crazy? It was. But all these often contrasting, apparently absurd elements fit perfectly into the show, combining with the music for a total immersion in a surreal world of sound and visuals, a rarely seen performance dimension that humorously underlined the most peculiar, omnivorous aspects of Japanese culture.

Shibusashirazu – that incidentally means something along the lines of "never be cool" – is a rare combination of artistic integrity and audience friendliness, offering a truly unique sensorial experience, a powerful, joyous celebration of creativity and spontaneous expression. 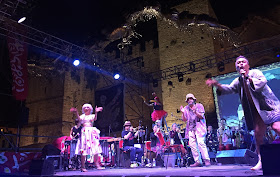 If you want to see what Nicola writes about, watch this clip from a performance in Rome three years ago: https://www.youtube.com/watch?v=nUIAwMR1u9E