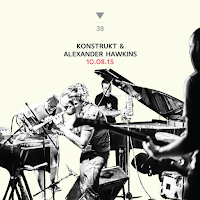 Konstrukt and Café Oto are back with another release, this one being a live recording from 2015 featuring pianist Alexander Hawkins.  Readers of this blog will likely be familiar with Konstrukt already, as the Turkish jammers have been consistently releasing several albums a year (mostly live) over the recent past, straddling lines of fusion, free jazz/improv, rock, and ethnic music.  They are often in collaboration with another artist or two, and this time it’s Alexander Hawkins, a relatively young jazz pianist who has been cutting his teeth in the UK improv scene with the likes of Evan Parker and Louis Moholo, while also leading his own trio.

Konstrukt typically operate as a quartet with some of them taking on multiple instruments, but the typical set up is drums, electric bass, reeds, and electric guitar.  Having a pianist like Hawkins adds a lot, then, and this recording offers a different type of sound than I am used to with Konstrukt releases.
As a group that is often hard to pin down in terms of genre, this album seems to me to be deeply rooted in the kind of ideas that Miles Davis was exploring when he originally went to “Electric Miles”, with albums like In A Silent Way, Bitches Brew, and A Tribute to Jack Johnson.  While this particular release does not have the space or minimalism of In A Silent Way, it also doesn’t get quite as straightforward as releases like On The Corner either.  In fact, it really is its own beast with its own voice, but I couldn’t help but to think of Miles own brand of electric jazz/funk/rock fusion while listening to this.

The recording has two tracks, or more specifically, two sets from the same night, each a single, 35 minute plus improvisation.  The first set is an incongruous, vaguely hypnotic combination of psychedelic grooving and jazz technique.  It sets down a disjointed and unpredictable groove, ambling along as a wall of sound.  However, it seems content to just ooze along without direction.  It is wholly unobjectionable, but also not gripping in any way.  I don’t get much of a sense of risk taking, and the exploratory nature of it is confined to a certain logic or approach that becomes formulaic.  I wouldn’t say it is bad in any way, but it didn’t keep my attention or interest, and I don’t see myself revisiting the set any time soon.

On the other hand, the second set sucked me in immediately and I was surprised that 35 minutes or so had passed when it ended, as it was that enjoyable.  It starts silent and spacey, unidentifiable electronic sounds and droning with a trickling of Hawkins keys spilling into the emptiness, which eventually turns into a full on cascade of adept soloing across the entire range of the piano, while the rest of the musicians establish a fragmented but melodic groove that sucks you into foot-tapping and head nodding places before totally flipping into more odd time signatures and barely tethered rhythms.  They still move like a juggernaut of sound, but there is more interesting interplay, less predictability, and more moments of sheer transcendence.  Often times they work toward a crescendo, with Hawkins and Korhan Futaci (reeds) trading licks among the chaos, while the high register and strident sound of the gralla cuts through the noise in an impressive flurry of notes at times.  They reach moments both dark and ecstatic, with quick changes that sometimes leave Hawkins plinking on his piano by himself, reveling in the wake of the massive wall of sound that just disappeared.  They explore a full range of interesting ideas that span the gamut of their varied styles, and by the time it gets going it is a totally different beast from any electric Miles, more aggressive, immediate, and varied.

I have gone with a rating of 4 for this one, because I have to judge the recording as a whole, but if I were given two tracks as good as the second set it could easily be a 5.  The first set may have seemed, well boring to a degree, but in context it was a decent table setter for the second, more daring set.  I highly recommend checking it out.  While this might not be totally successful throughout, it seems not to ramble along anymore, but to move purposefully toward the craziness and unpredictability of the second set, which expertly straddles the lines between the rhythm and repetition of funk/rock, the technique of jazz, the space of free improv, and the ecstasy of collective improvisation.

The second set is incredible, and the first set a nice warm up. To extend the Miles comparison ... Pangea/Agharta? Both great, just different energies?