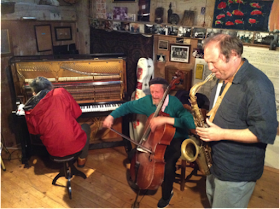 If you want free jazz concerts in Germany, away from big cities and scenes like Berlin and Cologne, there are marvelous venues in the country. I’ve previously mentioned exceptional clubs like the Manufaktur in Schorndorf and Weikersheim’s W71, but there‘s also Raum für Musik (Room for Music) in Zoglau (Bavaria) and Kulturspeicher in Leer (in the north, close to Bremen) and a number of others. The best venue however, is the Nigglmühle in Bernbeuren, set in the alpine uplands south of Munich.

The Nigglmühle, a former flour and lumber mill, is the home of Peter Ernst, who‘s been organising shows for more than 20 years there. He‘s always had good connections with the German free jazz scene, people like the late great bassist Buschi Niebergall, Wulf Teichmann (the man who translated some of the liner notes for FMP) and Alexander von Schlippenbach, which he‘s used to organise two concerts a year. Over the last 20 years almost all the great names of European free jazz have played there - Peter Brötzmann, Evan Parker, Peter Kowald, John Edwards, Johannes Bauer, Paul Lovens, and many more.

There are a number of things which make the concerts so special. First, the idyllic setting: the former mill is hard to find – it’s located at the outskirts of a village at a little creek – to get there one passes meadows and mountain scenery, and the air is wonderful. It’s a place where people go to to vacation. Secondly, the welcome and hospitable atmosphere: Peter Ernst and his family are excellent hosts. You pay for drinks but there are free schmaltz and curd cheese sandwiches and after the concerts, free soup. Finally, there’s the venue itself: the concerts take place in the former storage room attached to the farmstead. The wooden walls create a unique and attractive acoustic, and the room is stuffed with memorabilia from previous concerts and art brut exhibits. Different levels means clambering to get to your seat, but you‘re also close to the musicians.

For his first concert in 2016 Peter Ernst chose the trio of Tobias Delius (tenor saxophone, clarinet), Tristan Honsinger (cello) and Shuichi Chino (piano). Delius and Honsinger have a long time relationship in Delius’s 4tet (their album Pelikanismus was recorded at the Nigglmühle) and Chino and Honsinger  play in a piano quartet with bassist Takashi Seo and violinist Yuriko Mukoujima.Delius is a first-rate musician, able to combine smooth melody lines à la Ben Webster with dissonance and a rich timbre. In combination with Honsinger they reference large chunks of jazz history and - typical of the Dutch school of improvisation – often do so in a humorous fashion. The evening was dominated however, by Honsinger’s Dadaist word show and spontaneous comedy, around which the show was structured, particularly the second set.

Honsinger riffed on King Henry, bananas, and a boy who crawled out of a pumpernickel or holes in the wall (among other things) and Delius offered his own absurd contributions. Honsinger even used his shoe as a telephone to carry on a surreal dialogue (not generally recommended). He and Delius sang folk songs with Honsinger‘s voice an additional instrument. Nothing was overlooked as a source of sound (water in Delius‘ glass) or available prop: Shuichi Chino slowly undressed, peeling off his windbreaker and discarding his jacket until he stood in a Dutch windmill T-shirt (and his pants – this is a family venue!). Fully-clothed, Chino was the surprise of the evening, his hands flying over the keys, often in extreme registers, and exploring the interior of the upright piano. He also played the straight man, at his wits‘ end about the antics of the other two.

A thoroughly entertaining evening with beautiful music, good talk between sets and nice food to close. The next concert, in the autumn, is Jürg Wickihalder, Barry Guy and Lucas Niggli (also featuring Maya Homburger).
Paul on Tuesday, July 05, 2016
Share