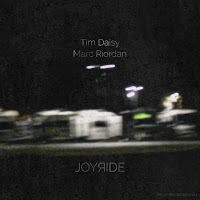 We’ve heard Tim Daisy and Marc Riordan play together before—we’ve even heard them in duet, on Daisy’s excellent October Music Vol. 1 (2014). On Joyride, the duo picks up where it left off with seven improvisations that bring together each musician’s complementary approaches to their instruments. Skilled on tuned percussion, Daisy is a musical drummer who can draw a rich array of sounds from his kit; meanwhile, Riordan’s piano playing, often dense and percussive, hints at his experience as a drummer. No surprise that this combination makes the two Chicagoans compatible improvisers, but it also leaves them flexible enough in their roles to guard against predictability.

Joyride opens with “Pay to Play,” full of fluttering brushwork from Daisy and crowded, sinewy lines from Riordan. Wasting no time in ascending to a pitch of intensity, the duo is forced to find escalation in unexpected ways. While Daisy makes the effective but inevitable transition from brushes to sticks, Riordan climbs the keyboard very gradually over the track’s five minutes, traversing the distance from the subterranean murmurs of first few seconds to the airy tinkling of the last almost without us noticing. The duo demonstrates a knack for this kind of high-energy improvisation throughout the album—for example “Pray to Play,” into which Riordan smuggles some Monk, or “Rules of the Roll (For Conlon Nancarrow),” where Daisy’s kinetic drumming proves a perfect match for Riordan’s indefatigable Taylor-esque volleys.

Elsewhere the playing is more meditative. “Stay Wakeful,” at eight minutes the longest track on the album, provides a particularly nice contrast to the rowdy opener. In the first half, Riordan earns an extended spotlight, atmospheric and searching; in the second half, he provides rhythmic accompaniment for Daisy, who gives us the opportunity to appreciate his command over the drums, which sing with gorgeous resonance when he wants them to. “Train Quill Writings,” as the title suggests, is another contemplative tune and a lovely way to bring the album to rest. Here Riordan’s sensitive playing evokes the image of ripples fading across the surface of gently disturbed water. Daisy provides rhythmic clicking, some strange buzzing, and finally more of that rich depth of sound—booming malleted toms, washy malleted cymbals. Both musicians come together beautifully just before the final silence falls.

Another reviewer has suggested that each of the duets on October Music Vol. 1 deserves its own full-length album. With Joyride, Daisy has set the bar high.