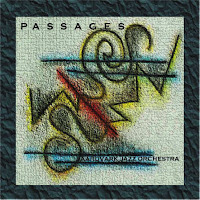 Here’s proof that there’s always something new to discover in the world of creative jazz and improvised music. The Aardvark Jazz Orchestra, which I hadn’t heard of whatsoever before reviewing this, their most recent release, has been around for decades (since 1973, to be exact), and they’ve released over a dozen albums in that time, most of them for Leo and Nine Winds. The constant presence since the orchestra’s inception has been Mark Harvey, who founded the group and has long been a fixture in the Boston-area improvised music scene. Harvey’s well-honed compositions and adventurous improvisational strategies are what give the group its character, making this an engaging and valuable release.

The record includes four pieces: “Spaceways,” a punchy and dynamically rich Sun Ra tribute that features some especially strong ensemble work from the horns and some delightfully jagged interjections on guitar from Richard Nelson; “Saxophrenia,” a sprawling 18-minute feature for the group’s saxophonists which moves in and out of a catchy Latin-themed rhythmic structure, and which offers terrific use of the orchestra as a whole in supporting each soloist; “Twilight,” a spare collective improvisation that effectively establishes a mood of mystery and introspection; and the album’s centerpiece, “Commemoration (Boston 2013),” a three-part suite in homage to those affected by the Boston Marathon bombing of a few years ago. What is striking about this suite is its emotional range: from the jarring dissonance and turmoil of the first part, “Maelstrom,” we move into the much more somber “Aftermath” and “Elegy,” both of which gain their power not from the orchestra’s physical force but from its more subtle harmonic textures and poignant melodicism. The overall effect is quite compelling, as Harvey refuses to resort to easy sentimentality; there are suggestions of hope by the conclusion of the suite, although they are tinged with a certain irreducible sorrow, as one hears in the stirring flute and arco bass passages at the heart of the haunting “Elegy.”