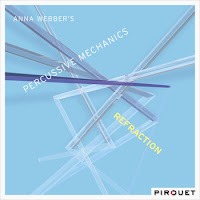 Anna Webber is a Brooklyn-based composer and instrumentalist who has been making ever-expanding waves since her 2010 debut as a leader, Third Floor People. Since that time, she’s been primarily associated with two groups: Montreal People and Percussive Mechanics, as well as the trio with Matt Mitchell and John Hollenbeck that produced the wondrous Simple. Percussive Mechanics is an international septet, with players hailing from both the States and Germany, where Refraction was recorded. Their first album together, self-titled, was a tantalizing blend of improvisation, Braxtonesque playfulness, and a rhythmic sensibility that owed more to motorik and Reichian minimalism than to the wilder-and-woollier branches of traditionally “American” jazz. This clean, precise sound has been carried over to Refraction, but not without some fresh touches: this recording surprises and astounds in spots, and it reveals Webber to be one of the most exciting young voices in contemporary jazz - both as a player and a composer.

Opening with a spacious, spare trickle of notes, “Five (Action)” is a tightly-wound opener, one that moves forward with the ineluctable persistence of a mechanical clock. It establishes the rhythmic modus operandi of the group: controlled taps, short bursts of notes that are as efficient as they are energetic, and hefty amounts of space. “Tacos Wyoming” takes this palette as a starting-point, but quickly adds to it an infectious melodic motif that winds its way throughout the piece. By the end, when the reeds, vibraphone, and piano are locked together in a convoluted, ecstatic dance, it’s exhilarating - it sounds like a jazzier reworking of Music for 18 Musicians, with shapes and patterns that shift, fuse, detach, and then go on to form different configurations. There are short instances of improvisation, it seems, but Percussive Mechanics truly shine in their sense of precision and control - with these compositions, there’s little room for error, and Webber has assembled the perfect group to bring her vision to life.

“Theodore,” one of the longer pieces on the album, starts with a series of tentative rustlings; after a few minutes, that formlessness is replaced with a solid groove from drummer Martin Kruemmling. Compared to the pointillistic percussion of the previous tracks, it’s somewhat surprising, but the rest of the septet waste no time in taking advantage of it. Almost as soon as it begins, however, it dissolves in an extended wail from the reeds - and then back again into the abstract sound-world of the beginning, with Max Andrzejewski’s marimbas, Julius Heise’s vibraphones, and Elias Stemeseder’s piano offering soft droplets of color.

“The All Pro 3 Speed” is something of a slow burner at first, with Igor Spallati’s bass providing the firm, rock-steady foundation. Additionally, Anna Webber here plays the flute, improvising with fervid exuberance and showing that her instrumental abilities are just as formidable as her talents for composition. As the piece develops, Wylie (on alto saxophone) joins her, and the two engage in a primal outburst that is rare for the group. While the restraint and exactitude of Percussive Mechanics are admirable, it’s admittedly exciting to hear them go a little haywire. As its name implies, “The All Pro 3 Speed” works in several modes - towards the end, the (two!) drummers approach tempos that are closer to Drum ‘n’ Bass music than jazz, but not for long - soon, we are back to the group’s aforementioned modus operandi: clattering rhythms that intersect and complement one another with machine-like methodicalness.

Anna Webber’s Percussion Mechanics is a joy to listen to, and they provide an interesting take on contemporary jazz, one that is as informed by Reich, Terry Riley, and composer Arvo Pärt as it is by maestros like Braxton and Henry Threadgill. Hopefully, Webber will get involved in more projects soon and release music that is of the same high-caliber as Refraction - I, and many others, will be eagerly waiting for it!

This CD was already release in November 2014.
http://www.pirouet.com/home/album_d.php?release=PIT3079

But the music and your review are appreciated nonetheless!

And Anna Webber has one more release with the same group and similar music in 2013.
http://www.pirouet.com/home/album_d.php?release=PIT3069

Thanks. I wonder how this got flagged as new ... maybe a recent upload to Bandcamp?