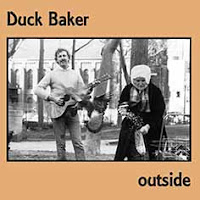 Outside is an important release of Duck Baker’s free jazz guitar solos. As a guitarist that plays using a fingerpicking technique and draws from the styles of blues, gospel and ragtime among others it’s not surprising that most of his recorded output is what would normally be considered to fall within the mainstream variety. The only other album that documents his more abstracted playing is Everything That Rises Must Converge, which makes this current release all the more significant.

This compilation of material was recorded from three differing periods spanning the years 1977 to 1983, with some overlap in pieces. Ornette Coleman’s ‘Peace’ gets two outings as does some of Baker’s own material. His style is fluid and there is plenty of rapid twisting musical lines that tumble over one another in what at times sounds like a stream of consciousness. Baker’s technique is excellent and he incorporates more percussive playing (body sounds etc) into the pieces such as on ‘Klee’ and more reflective chord-melody approaches as demonstrated on ‘Like Flies’ and the ol’ standard ‘You Are My Sunshine’. As well as the solo pieces the last two tracks are a duet with Eugene Chadbourne, which are slightly less in sound quality but not so that it spoils the enjoyment of them. This is an important release from Emanem and one we should be grateful for.
Paul on Tuesday, August 30, 2016
Share

I also recommend "The Ducks Palace" (Incus, 2009) with Derek Bailey, Roswell Rudd and others.

Absolutely amazing, to think that thousands (me included) learnt from his folk music finger-picking books, when all the time he's making free-jazz, brilliant.