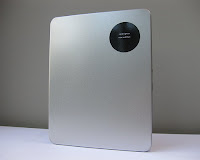 Now and Then is Ian Brighton’s second solo release in just under forty years! His first album Marsh Gas being released way back in 1977 is currently unavailable and commanding high prices as a collectable rarity. So it is with great joy that Confront recordings have issued the guitarist’s latest set of pieces, including a piece from the archives recorded over 30 years ago. Ian Brighton’s style is similar to that of Derek Bailey’s, having originally taken some lessons from the past master. However, Brighton’s playing is not a pale imitation and he does bring his own personality to the music. Whereas Bailey’s technique with it’s ‘Webernesque’ influenced fragmentations works towards a collage of alternating sounds, the complexity of which adds to heighten the abstraction, with Brighton it appears that he is more interested in blending the sounds, which is particularly noticeable when collaborating with others.

The first track ‘A Voice You Left Behind’ starts with a sound bite of Derek Bailey philosophising over the tricky subject of recorded improvisation before Brighton enters the sound space with a very creative and colourful improvisation for solo guitar. The album is a combination of solo’s, duo’s and quartet configurations with collaborations from half a dozen guesting musicians including Philipp Wachsmann (violin) and Brighton’s son Paul (electronics). Another notable mention is the track ‘Percussion Discussion’ with Brighton’s guitar blending with the percussive and resonant sounds with subtly different reverbs (and some electronic manipulation of the percussion) providing extra depth. An excellent and interesting album.

Thank you very much for your kind review
regards
Ian Brighton

Your very welcome Ian. It's a pleasure to listen to your work - looking forward to hearing future projects!

All the very best
Chris Haines