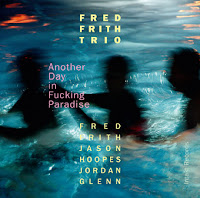 Fred Frith’s latest record for the Swiss Intakt label finds him looking to the past: “I appeared to be channeling some of my earliest rock and roll experiences,” he remarks, dropping names like David Gilmour, Muddy Waters, and John McLaughlin. But it’s important to note that this is an assessment made retrospectively, after the music had taken shape, rather than a driving conceptual motivation. “When I proposed this trio I had nothing in mind beyond getting together with a couple of formidable musicians who I love and respect and seeing what would happen, which is pretty much the way things go in my world.” So don’t come to Another Day in Fucking Paradise expecting anything cute or clever—nostalgia, homage, pastiche. Instead, prepare to hear the veteran guitarist take the power trio into the future with two relatively younger players, both former Mills College students: Jason Hoopes on electric and double basses, and Jordan Glenn on drums and percussion.

Though the album is broken into 13 mostly-short tracks, each one communicates fluidly into the next like a series of open doors, from the gloomy chimes of “The Origin of Marvels” to the propulsive brushwork of “The Ride Home.” This continuity invites the listener to experience the music in its broader structural shape, vaguely narrative, as the first several tracks sketch the introduction of conflict. The above-mentioned “Origin,” for example, leads into “Dance of Delusion,” upbeat and punchy, which leads into the oddly plaintive vocals of “Poor Folly,” which descends into the aptly titled “La Tempesta.” While Hoopes and Glenn are responsible for much of the character of these early tracks—springy electric bass and trashy cymbals—it’s Frith’s layered guitar wizardry that defines the sound of the more abstract middle tracks. At over 11 minutes by far the longest piece on the album, “Yard With Lunatics” is a landscape of spare, eerie noise, from tinny remote strumming to warning-siren wailing. Several more tracks of distorted ambience climax in “Schlechtes Gewissen” (that is, “bad conscience”), where Frith’s torture-device guitar effect bristles antagonistically up against Hoopes’s feverish bowing. The album ends back on the firmer ground of meter and groove, though as the title of the penultimate track, “Phantoms of Progress,” warns us, we would do best to keep our guard up.