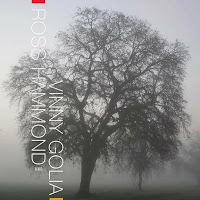 The Sacramento based guitarist teams up once again with the woodwind player Vinny Golia (having played together in Hammond’s Quartet) for a very pleasant sojourn through some largely emollient improvised duets. As one would expect Hammond tends to produce the harmonic grounding for Golia’s flights of fancy. The roles of the instruments within the music could be likened to those in Indian classical music, with Hammond’s guitar taking the part of the tambura, often producing inventive and musically fluid drone-like playing (enhanced all the more by the choice and resonance of a 12 string), whilst the various wind instruments that Golia deploys exploits or contrasts with the rhythmic pulsations of the guitar.

Having an overall vibe somewhere between a modern folk music and a lost indigenous music which contains subtle changes in colour from Hammond utilising a bottleneck slide at times on his guitar, to the alto flute, bass clarinet and soprano saxophones that Golia deploys from track to track. Amongst the sublime reflections there are more energetic passages that whip-up into a frenzy with both musicians completely committing to the cause and seemingly getting lost in the whirl of sound.

Awesome disc. These two have been cranking out quality music for quite some time, both individually and together. I'm looking forward to catching Vinny at this year's angel city jazz festival in L.A. In October. I live in Seattle but the fest is worth the trip every year.