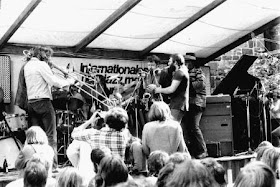 This week we’ll be reviewing music from German jazz festivals spanning 1969 to the present, concluding with a review of a recent festival.

Considering the role of jazz in postwar West Germany is of interest, both musically and culturally. There are few publications on the development of jazz in the early years: for most West Germans jazz (and later Rock’n’Roll) was still regarded as “Negermusik“ (the music of the negroes), a pejorative term. Even among fans, its image was rather lowbrow. In contrast, jazz is now a diverse and sophisticated art form associated with cross-cultural understanding, improvisation, free expression, the integration of world music and other ideals central to the cultural identity of a reunited Germany. The reasons for this transformation can be seen in the musical evolution of jazz itself together with broader changes in (especially West) German society and culture.

In the 1950s people like "jazz pope" Joachim-Ernst Berendt tried to establish jazz as a serious musical art form, on the same level as classical music. He introduced jazz at the Donaueschingen Music Days, a stronghold of the postwar classical avant-garde. Setting up pure jazz festivals also played an important role. The first was 1953’s Deutsche Jazzfestival in Frankfurt, presented as a showcase for the best German jazz musicians, during the 1950s every important German jazz musician played at the festival. It was a perfect symbol of “Wirtschaftswunder“ (the economic miracle) when Germans tried to put aside the Nazi years and enjoy the results of their new prosperity. European jazz mainly imitated the American scene and there were few genuinely original contributions. It was only in the 1960s that Europeans began to distance themselves from such role models: Peter Brötzmann’s trio had its breakthrough in Frankfurt in 1966. In retrospect, the end of the 1960s and the early 1970s can be seen as the "golden age" of German free jazz. The 12th Frankfurt festival had an almost complete free jazz program: even the festival big band played it as a homage to the younger generation. [1]

In the 1960s and 70s young Germans, seeing that former members of the Nazi party still occupied high ranking political, commercial and judicial posts, rebelled against the values of their forefathers and demanded a proper re-evaluation of the Nazi period. The evolving free jazz scene reflected these social developments with the concept of “blowing to pieces“ (a term coined by Peter Kowald) to create something new, distanced from the values of the previous generation.

In 1964 Nicolas Nabokov, the director of the Berliner Festwochen, a cultural festival of film, art, literature, theater and music, approached Joachim-Ernst Berendt to organize a jazz festival. Originally planned as a one-off, Jazzfest Berlin was a great success, prompting Berendt and his collaborators, Ralf Schulze-Bahrenberg and George Wein (the Newport Festival impresario), to approach the Berlin city council to set up a permanent independent jazz festival. It still has a reputation for bringing the avant-garde and traditional together, and has played a major role in establishing jazz as part of German culture. The essential question facing the German jazz community however, was no longer whether jazz was art, but how it could make its own significant contribution. In 1966 Berendt commissioned a work from Alexander von Schlippenbach, who brought together the crème de la crème of the young German jazz avant-garde and presented “Globe Unity“, a piece which was fiercely rejected and praised by both audience and press. It was a landmark for German free jazz, symbolizing the emancipation of the improvising scene.

When Peter Brötzmann was uninvited from the Jazzfest in 1968, he and his fellow musicians from FMP (Free Music Productions) founded the Total Music Meeting and a year later the Workshop Freie Musik. The Total Music Meeting was an international annual festival for improvised music, an alternative to the Jazzfest (though free jazz musicians have continued to play there as well). The plan of the organizers, centered on Jost Gebers, was to present contemporary developments in improvised music. This was even more successfully realized in the Workshop Freie Music. As Gebers put it:


In 1970 the three day event (of the first workshop) turned into a five-day workshop with public rehearsals, two stages in the exhibition hall (of the Berlin Academy of Arts) and a dyed-in-the-wool free jazz program. Now this showed that our first attempt to take this kind of music out of the concert halls and the clubs into more open spaces was the right way. The constraints of the musicians and the audience could thus be considerably reduced. We adhered to this concept until 1972. But also in this area there were considerable misunderstandings. Musicians and groups who wanted to return to close concerts with a predetermined course of events from the open form of the workshops, groups from the audience who wanted to play along with or against things. (…) However, both sides, the musicians and the listeners began to make better use of the possibilities.

In the following years Gebers focused on single instruments and commissioned works for larger ensembles, but stuck with the festival’s workshop character. [2]

In the early 1970s radio stations also played an important role. In 1966, Joachim-Ernst Berendt had established the Free Jazz Meeting Baden-Baden (later, the New Jazz Meeting Baden-Baden) organized by SWF, a station in the South West of Germany (now SWR). There were public concerts and rehearsals, commissions, and broadcasts of sometimes up to 400 minutes of music. An extraordinary example is the recording of the Globe Unity Orchestra in 1975, parts of which are available as an FMP CD. There were also lengthy broadcasts by Radio Jazz Group Stuttgart (led by Wolfgang Dauner), featuring a variety of performers from the European free jazz scene. (Many of these unreleased broadcasts are available in the archives of Inconstant Sol.)

It was a time when the public was generally willing to fund festivals of free music, and there was an enthusiastic audience. Other important festivals that were established were the Moers Festival, the short-lived Holy Hill in Heidelberg, several festivals in Wuppertal (e.g. in the Von der Heydt Museum with Brötzmann as co-organizer and the Wuppertal Free Jazz Workshop). Later there were “360 ° - Spielraum für Ideen“, “Grenzüberschreitungen“ (curated by Peter Kowald) and festivals at Burg Altena and Balver Höhle (a cave near Iserlohn), both in the Sauerland region, east of Cologne. From 1972, the Moers festival, organized by Burkhard Hennen, was a showcase for free jazz, at which Alexander von Schlippenbach, Peter Brötzmann and Manfred Schoof played a major role. From the outset, Moers had an international orientation, which continues to this day.

Burg Altena and Balver Höhle were smaller but equally interesting festivals, organized by Heinz Bonsack and Karl-Heinz Klüter respectively. Bonsack, a dentist, wanted to push new music like Krautrock and free jazz, and also promoted musicians from Eastern Europe. The line-ups were exciting, people like Tomasz Stanko, Joachim Kühn and Manfred Schoof played at Altena between 1969 and 1974. A festival with a spectacular line-up was cancelled in 1975, as the city council didn’t want to guarantee minimum salaries for the musicians, which more or less put an end to the festival. Klüter, who‘d also been involved in the Altena festival, had already left and established Balver Höhle, and with his existing contacts managed the festival in the cave as a one man show, even serving at the bar. Notwithstanding the absence of public funding he was able to engage bands like Brötzmann/Van Hove/Bennink, the Franz Koglmann/Steve Lacy Quintet, and vibraphonist Gary Burton, as well as continuing Altena’s theme of musicians from behind the iron curtain. The focus subsequently shifted to more mainstream music and there were no more festivals after 1984.


So, in more than 60 years of German jazz festivals, jazz has both mirrored and made its own contribution to changes in German society and culture. Now, it’s widely accepted as an art form (“Negermusik“ has been banished), even if perceived as not being on quite the same level as classical music. But in times when cultural funding has been dramatically cut, there are hardly any festivals devoted entirely to free jazz in Germany. In the last four years Louis Rastig, Conny Bauer’s son, has run the A’Larme! Festival in Berlin, which takes place in July/August. And there’s Jazzwerkstatt Peitz, the legendary festival from the former GDR, revived by Ulli Blobel, one of its original organizers. [3] The only festival that has survived is Moers, which recently moved to a new, modern festival hall. The 2016 festival could only take place with a generous grant from the city of Moers. To slightly misquote Nesushi Ertegun, there‘s no money in free jazz. The future of all these festivals is insecure.

- Much thanks to Ernst Nebhuth for providing valuable information on the history of jazz festivals in Germany.

[1]  From then on the idea of the Frankfurt Jazz Festival was to encourage the German scene to play with American musicians; the festival still exists today and is therefore the oldest continuing annual jazz festival in Germany (save that between the 1960s and 1980s there was a period when it was organized biannually).

[2]  For a complete overview of the WFM and the TMM check these websites:
[3]  Peitz would deserve an article of its own. If you want to get an idea what happened there, you could read  an article about a CD with various artists from the festival or - if you read German - I strongly recommend the book “Woodstock am Karpfenteich“
Paul on Monday, August 15, 2016
Share

Thanks a lot, Tim. Much appreciated.