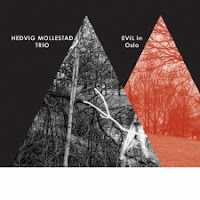 For a group that has been together for around five years and released several strong recordings, the Norway-based Hedvig Mollestad Trio continues to face the challenge of finding its core audience.  As a band with a solid foundation of riff-heavy hard rock influenced heavily by Led Zeppelin and Black Sabbath, with a good deal of prog-rock sensibility as well, a lot of jazz listeners won’t be inclined to take the band all that seriously.  But at the same time, their significant improvisational complexity and dedication to long, instrumental-only compositions means that they won’t be connecting with a lot of traditional rock fans either.  The fact that they’ve played to great acclaim on the jazz festival circuit in Europe may indicate which way things are leaning for the group at present.  In any case, this live recording should help make a case for the band’s prowess, as it’s a compelling display of propulsive, guitar-based music that is quite well-played and infectious.

Hedvig Mollestad Thomassen is a superb guitarist, equally adept at churning out hard-edged, pile-driving riffs and offering up atmospheric, effects-laden explorations.  Listen to her delicate, introspective work on the haunting ballad “The Valley” for evidence of her versatility. And her partners are similarly skilled, with bassist Ellen Brekken and drummer Ivar Loe Bjørnstad finding a healthy balance between straightforward rock rhythms and occasional openness for improvisational freedom.  To a large degree it’s the flexibility of Mollestad’s bandmates that makes this group more than just a “rock band”: take for example the free-ish interlude about five minutes into “For the Air,” the album’s opener, with Brekken and Bjørnstad surging along, leaving the steady rock beat aside for a moment with the help of Brekken’s nimble bass line; or the detour into a reggae-inflected rhythm midway through “Ashes,” the second song on the record, over which Mollestad provides some tasty effects.  Sure, at over seventy minutes of music stretched over nine songs, things can get a bit monotonous at times, as this is fundamentally a rock record; a bit more harmonic and rhythmic invention here and there wouldn’t hurt.  Even so, there’s plenty to enjoy, and it’s a really fun record to crank up loud to test the limits of your stereo.