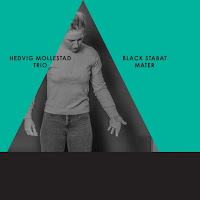 Black Stabat Mater is the twin album of the live, double album Evil in Oslo, both were released on the same day. The live album summarized an era of this Norwegian, Oslo-based power trio, highlighting the trio spectacular manner of abstracting the killer riffs of guitarist Hedvig Mollestad Thomassen into expansive, rhythmic textures, backed by the tight, kicking rhythm section of bassist Ellen Brekken and drummer Ivar Loe Bjørnstad. Black Stabat Mater, a wordplay on Black Sabbath and the catholic hymn, the trio fourth studio album, experiments with more open and adventurous terrains.

The opening piece, the 14-minutes of “Approaching/On Arrival”, demonstrates the trio new approach with Mollestad Thomassen's soaring, psychedelic-fusion-tinged and effects-laden extended solo, at times bringing to mind Deep Purple’s Ritchie Blackmore's seminal solos with her fingers running up and down the guitar neck, but devoid of all metal clichés and spiced with highly addictive riffs. Suddenly, it morphs into a free-floating, dense metallic-noisy drone that blends influences from Sonny Sharrock and Thurston Moore. “In The Court Of The Trolls” is a fascinating deconstruction of later-era, prog-rock of King Crimson with a raw, primal energy. “-40” is a fragile and hypnotic searching soundscape that stresses the trio imaginative, collective interplay. “Somebody Else Should Be On That Bus” closes this impressive and too short album, only 33 minutes long, with a heavy bass and drum grind, the basis for Mollestad Thomassen's acrobatic solo.

I liked Evil in Oslo. Great for air gee-tar.