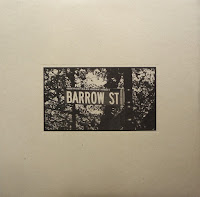 Joe McPhee is easily one of the most interesting stories in all of free jazz, not because he has some wild backstory or clichéd tortured artist modus operandi, but because of his incredible longevity, consistently interesting/progressive/talented playing, and willingness to constantly push his own boundaries.  He has proved a wonderful player in all types of ensembles and genres for decades, and belies some of the free jazz stereotypes we too often fetishize, such as struggles with mental illness, drug abuse, or dying young.  Simply put, he has proved that there is a career in playing jazz on your own terms, even when those terms challenge the status quo.  Perhaps this is because he didn’t even pick up the saxophone until he was 32, already aware of himself as a person, yet still carrying an immense fire in his belly that persists even into his 70’s.

…Which perhaps makes this live recording of his Survival Unit trio in memoriam of the recently departed Ornette Coleman so apropos.  Ornette is a jazz musician to which everyone is indebted, but also someone to which McPhee specifically has a very deep spiritual and musical connection.  On top of that, they both were unorthodox and largely idiosyncratic even within a fringe genre, while maintaining careers that spanned genres and remained successful for way longer than what seems tenable given their uniqueness and sincerity.  So while some have pointed out that this release dedicated to Ornette Coleman was recorded a decade before he passed, I can’t help but think it is a perfect goodbye to someone who was a friend, mentor, and so much more.  He may not have played with Ornette in mind on that night in 2004, but the spirit of the evening spoke to McPhee, and I can completely understand why.  What’s linear time in free jazz, anyway?

So on this beautiful, mournful, ecstatic piece of music McPhee is joined by his Survival Unit comrades, Fred Lonberg-Holm on cello and Michael Zerang on drums.  McPhee’s saxophone wails and bleeds with drawn out passages underscored by melancholic cello keys and the odd cymbal smash.  In the next passage it may ride droning cello strings on an intertwining ascension or plaintively and almost silently lay behind a cornucopia of lightly tapped percussion instruments and plucked strings.  It has a deep feeling of solemnity and mournfulness, like all of this should be taking place in a cathedral or somewhere else rich with symbols and spiritual connections.

Though in other parts this is certainly a jubilant celebration; a remembrance of something that hadn’t happened yet, but that somewhere deep down we all know will happen, to Ornette and the rest of us.  So in that sense it is not an album specifically dedicated to the type of jazz musician Ornette Coleman was, but in memoriam of all the loss we feel on a regular basis and the gnawingly thin line between existing and not, and I’m sure when McPhee listened to it again he couldn’t help but think of his old friend.  Though that is not to say that it is a severe or overly serious outing, or even too morose because the music here accepts and uplifts as much as it laments, and when Zerang’s drums fly into a full frenzy and Lonberg-Holm’s cello begins sawing short bursts of notes across the high register McPhee blows with the same playfulness, fire, and joy as a septuagenarian as in his earliest recordings, while demonstrating all the technique and things he has learned as both a musician and person since that time.

This recording works on so many levels, but for me it has the pureness of feeling and the weight of time that set apart the freest expressions of the self and the human condition.  It could’ve been recorded at any time and any place, it’s still easily one of the best things I’ve had the pleasure to listen to this year.
Paul on Tuesday, August 09, 2016
Share

Sold out at source
Some copies available from www.instantjazz.com