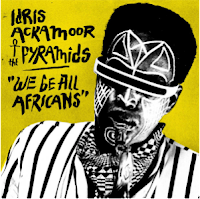 Between 1973 and 1976 The Pyramids released three albums full of percussive, spiritual, off-the-wall African jazz: Lalibela, King of Kings and Birth/Speed/Merging. In combination with extravagant live shows that included performance art, theatre, and dance they soon became a cult band. However, in 1977 they split after a show at the UC Berkeley Jazz Festival.

About 30 years later, The Pyramids reunited after their music has been rediscovered by vinyl aficionados and jazz fans. Their live shows, in which they wear alien costumes, play exotic instruments, tap-dance, or involve the audience in the performance, are still spectacular, which is why they have become quite successful again (if you want to get an impression you can watch this excerpt from a concert in Munich). In 2011 they released Otherworldly, their comeback album and in 2012 the group signed to the Munich-based label Disko B, who released a three CD album, They Play To Make the Music Fire!, and all three albums from their rare back catalogue. In all the active years of the band Idris Ackamoor (alto sax) has been the leader and his new band features original members like renowned bassist Kimathi Asante (a.k.a. Thomas Lee Williams) as well as new ones like violinist Sandra Poindexter, bassist Heshima Mark Williams, and drummer and percussionist Babatunde Lea.

Their new album We Be All Africans uses all the elements which made the early albums so great: Afrocentricity, trance-like rhythms and chants, Sun-Ra-inspired tunes and improvisations, spiritual jazz and free jazz outbreaks, two basses, no guitar. But Ackamoor also adds new ingredients to the brew - like a good dose of Afro funk à la Fela Kuti and yearning, mournful saxophone sounds that remind me of Pharoah Sanders.

An example of this is “Rhapsody in Berlin”, a heavy funk piece, dominated by sharp horn riffs. It's a subliminal euphoric track, which is structured around a repetitious major theme. The saxophone takes off to a classic 1960s free jazz solo, a Billy-Bang-violin also makes a brief solo appearance, the vocals holler over a polyrhythmic groove. The most obvious homage to Sun Ra can be found in “Silent Days“, in which vocalist Bajka and Ackamoor contribute mysterious lyrics in the best Ra tradition (“Walking in the galaxy/ Through the universe”). The track features familiar cosmic symbols and is based on North-African grooves over which the violin, two flutes and Ackamoor (here on tenor) flow elegantly. On the other hand, the album contains pieces like “Epiphany“, a relaxed, laid-back tune with an easy pulse. It opens with a spacey and cool synthesizer phasing, counterbalanced by a mellow bass line and crisp horn stabs; if you close your eyes you can see a caravan moving through the Sahara.

We Be All Africans is a very nice album, especially for fans of John Coltrane’s Kulu Sè Mama, Alice Coltrane’s Journey in Satchidananda or Pharaoh Sanders’s Thembi it can be absolutely recommended.

The album is available on vinyl (including a CD), CD and a download from Mr Ackamoor’s bandcamp site: https://idrisackamoor.bandcamp.com/album/we-be-all-africans, where you can also listen to the album.