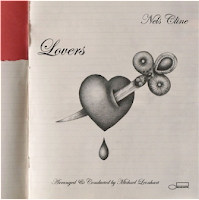 When Nels Cline announced his Blue Note debut his fans were excited. How would an album for a major differ from his recent collaborations with Michael Wimberley and Thollem McDonas, White Out or The Nels Cline Singers, all on independent labels?

Cline is possibly the most versatile and interesting guitarist currently working. Among other things he's a member of the alternative rock superstar band Wilco and Rova::Orkestrova, he’s played with Medeski, Martin & Wood and in duos with Thurston Moore and Elliott Sharp. Now, he’s made an album about love.


“I have been dreaming about...my rather obsessive idea of this record for well over twenty-five years, and it was always going to be called Lovers. It is meant to be as personal in its sound and in its song selection as it is universal in its endeavor to assay or map the parameters of “mood” as it once pertained, and currently pertains, to the peculiar and powerful connection between sound/song and intimacy/romance.”

In order to realize this idea, Cline is augmented by a chamber orchestra consisting of some of the most prominent members of the New York avant-garde scene: Devin Hoff, Steven Bernstein, Kenny Wollesen, Zeena Parkins, Erik Friedlander, and many more. The collection includes covers of songs from the great American songbook, more recent composers, and some Cline originals.

Notwithstanding his familiar elegant touch, the first four pieces still raise an eyebrow – mellow and straight, with no edge or irony, sounding like the score to a Fifties movie. Cline admires great jazz guitarists like Wes Montgomery, Grant Green, Joe Pass, and Bill Frisell, and although the performances are laid back, possibly a little saccharine, there’s real tenderness in his interpretations. On Jerome Kern’s New Orleans swing number “Why Was I Born?“ or “The Bed We Made“, he has a feathery touch which is beguiling. However, in this first part of the album there already are more ambitious covers, like Jimmy Giuffre’s “Cry Want“ and Gabor Szabo’s “Lady Gabor“. The first one with the orchestra only delivering sound snippets, the second based on a monotonous beat.

The other half of the album takes a different approach, including adaptations of songs by Arto Lindsay, Sonic Youth and Annette Peacock: more offbeat compositions. The arrangements, by Michael Leonhart, are rougher here, sometimes dark and minimal, and Cline’s playing more direct, with glimpses of his crystalline, rock accent. But throughout, the album remains true to the underlying theme, reflecting the differing emotional connections which can make up a romance. Behind an urban jungle groove, Sonic Youth’s “Snare, Girl” brings Thurston Moore’s melody to the fore, played more like a country&western tune, with the orchestra largely absent. It provides a nice contrast to Sammy Fain’s lively “Secret Love“ from the Calamity Jane soundtrack.

The highlight is “The Night Porter/Max, Mon Amour“, joining two songs by Daniele Paris and Michel Portal. They‘re from movies dealing with unexpected romance. The Night Porter is about a sadomasochistic relationship between a Nazi death camp survivor and her tormentor, Max, Mon Amour about the love between a woman and a chimp. The surprisingly beautiful principal tune of the first is interrupted by eerie, mechanistic sounds. The second part’s cool theme eventually wanders astray.

Lovers is both restrained and experimental, with standards and lesser known tunes imaginatively set. Clear your mind, sit back, and enjoy a great collection.

The album is available as a CD and double vinyl.
Paul on Monday, August 22, 2016
Share

I've listened to this one a couple of times now and each time enjoying it more. There is a measured beauty to it.

Yes, I felt the same. First I was flabbergasted but the more I listened to it the more interesting details I discovered. I hope it'll be a success for him.