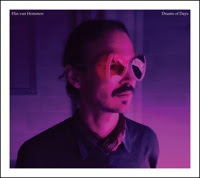 Brooklyn-based, Dutch drummer/pianist, Flin van Hemmen has created a delicate and adventurous album with Drums of Days. His well-disciplined trio is bassist Eivind Opsvik, acoustic guitarist Todd Neufeld, and himself on drums and piano.

The album opens with 'Drums of Days I', van Hemmen on piano, striking open-ended tonal clusters, while Opsvik draws out some long droning tones. Neufeld provides deliberately cool strokes of chord tones, striking hotly on occasion as well. They create an atmosphere fraught with tension and possibility. The follow up 'Morsel!', featuring guest saxophonist Tony Malaby, begins with an eerie whistle and tentative melody played high on the bass. It's short, a bridge to the percussive clatter that ensues in a three-way dialog of 'Dream Tree'. The next big track is 'Aching Arches', which finds van Hemmen back at the piano playing over some taped ambient sound. Two plus minutes into the track, the trio rises again, fragmented chords trail off into silence, the arpeggiated melodies flicker like sparks against the void, as a musical glow begins to appear, then gives way to a spoken section - the poem 'Tide' by musician/poet Eliot Cardinaux - and the words intertwine with the instruments.

The three-part suite 'Sensitive Chaos' is a musical poem of sorts, no strong melody lines, rather an exploration of textures and times. 'Field, Sound' offers more coherent melodic phrases and a stronger pulse, and 'Vorpmi Tsal', is one of the more song-like tracks of the album, and a nice morsel to sink your ears into. Ending with a bright piano refrain, 'Drums of Days II' takes on a solid groove and proves that there is nothing quite like the sound of the classical guitar in avant-garde jazz. The closing track is called 'Ives', and I will go out on the limb to say that it is in some way an homage to the early 20th-century modernist composer. After a long deliberate start, the song opens up into an energetic exchange of ideas, and fitting end to the album.

Drums of Days is a quiet and exploratory album. van Hemmen has created something unique and worth a deep listen.