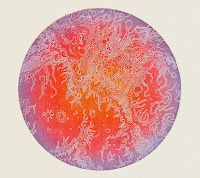 Sometimes, musicians active in opposite parts of the globe and playing in different musical genres can meet and immediately form a strong connection, based on a shared passion for improvisation and that rare instinctive understanding that sparks the best moments in free music, and their meeting suddenly sounds inevitable.

This is the case with Ryoko Ono, a saxophonist from Nagoya active in various musical styles and collaborating, among others, with Tatsuya Yoshida in the Sax Ruins duo, and Rogier Smal, an Amsterdam-based percussionist who has worked with diverse musicians like Marshall Allen and Eugene Chadbourne. After a chance encounter in Japan, they decided to meet again in Europe to record together and further develop what must have been an electrifying first meeting. The results are the nine improvisations contained in this CD, jointly released by Jvtlandt and Toztizok Zoundz.

The record starts with a blast: “Untitled 1” is an implacable sonic assault of blazing saxophone lines and thunderous drums in a flexible frame of gradual stops and sudden accelerations. The impact is breathtaking, and the track exemplifies the spirit that pervades the whole record, with Ono moving with striking dexterity around a myriad of melodic and rhythmic ideas, while Smal works on different percussive colors and precisely placed accents, modulating his muscular approach in a continuous open exchange with the saxophone. The instrumental quality of the musicians is impressive – from Ono's winding free-bop phrasing and unorthodox vocabulary to Smal's nuanced delivery and choice of timbres – but technique is never an end in itself, and is always used to shape and enrich the spontaneousness of a tight improvisational dialogue. The album is built on a variety of different strategies, always keeping the music firmly planted in its free jazz roots but developing the pieces with a clever compositional logic, mostly dispensing with thematic hooks but adding a meaningful dimension to each tune by other means, like the metal percussions of “Untitled 3”, Ono’s quirky vocalizing on “Untitled 4” or her circular breathing excursions on “Untitled 8”.

Consistently excellent from start to finish, this record is an astonishing debut by a powerful new improvisational unit, and nothing less than a revelation – an exhilarating musical world of telepathic interplay, fresh ideas and instrumental virtuosity.

Outstanding ! This is going to be ordered today. Thank you for posting this review. Great write-up.