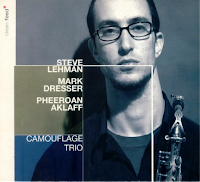 Given the recent deluge of accolades Steve Lehman has been getting, it’s no surprise that we’ll start to see reissues of his earlier recordings, including this one, his first for the Clean Feed label back in 2004.  It looks as though this release will be limited to mp3s and vinyl, so CD loyalists will be stuck with tracking down the now out-of-print original.  I can’t really speak to the benefits of hearing this in 180-gram vinyl, since the good folks at Clean Feed didn’t provide a copy in that format; but even in an mp3 version, this is a very fine recording, and it’s a valuable window into Lehman’s early career when he was still an emerging talent.

One of the most common observations on Lehman’s recent releases concerns the intricacy of his writing: his superb Mise en Abime from 2014 certainly stands out in that regard. And one can see hints of that potential here as well: the record’s first cut, “Structural Fire,” is a well-titled example of Lehman’s ability to harness all his creative energy and power through a complex and well-constructed composition that teeters precariously on the cusp of chaos but never ultimately succumbs to it.  It is a 15-minute tour de force, to be sure—but what impresses me the most about it is Lehman’s technique on alto.  He exhibits stunning improvisational authority and command, with a seemingly limitless ability to explore each and every idea to the full, and still having more in reserve.  It certainly doesn’t hurt that Lehman has outstanding partners in Mark Dresser on bass and Pheeroan akLaff on drums: these guys can and do follow Lehman anywhere he wants to go, and their endless elasticity combined with a strong undergirding sense of pulse is the perfect support for Lehman’s flights.

There’s also a good deal of stylistic range on the record, as it’s not all quite up to the stratosphere reached on “Structural Fire.” Track three, “Complex C,” features some first-rate abstract arco playing from Dresser, with some thoughtful interspersed commentary from akLaff before Lehman joins in on Sopranino, an instrument on which he also excels (see “Interface,” the scorching final track on the record, for further proof of this!).  Track four, “Huis Clos,” is a compact four-minute post-bop vehicle, with Dresser and akLaff locking down the rhythm impeccably.  And “Motion,” the fifth track, is a lengthy exercise in moody exploration, with some particularly sensitive and subtle playing from Lehman and akLaff and more excellent arco work from Dresser.

Clean Feed is justified in celebrating this re-release, as it was one of their earliest noteworthy recordings, one which helped put the label on the map.  And it did the same for Lehman, who announced convincingly with Interface that he would be a major force on the creative music scene for years to come.

Some of Lehman's later efforts have taken me longer than most to warm up to the compositional intricacies which initially strike me as overly cluttered. Not so this which grabbed me right from the get go initially and now, listening to the remastered on Spotify, still has massive staying power.