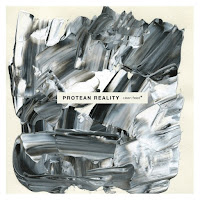 
Paul asked me to review this one a couple of weeks ago and, not being familiar with the musicians, I agreed.  Well, I’d heard Chris Pitsiokos but that was it.  I thought it might be nice to approach it from the perspective of surprise so I intentionally avoided looking anything up on the internet about the band or the individual players.  I chucked it on in the car for the first spin, which turned out to be a really terrible decision.  I felt like I was being assaulted by total chaos that was completely out of step with navigation, vehicular or musical.  I spent the rest of the week avoiding the album, dreading the very real possibility of forcing myself to either write the review that will keep food off these guys’ tables – or pass the album onto another reviewer.  Since total chaos isn’t something I normally loathe, I also hoped that the next spin would show that I simply played it at the wrong time and location.  When I finally kicked back and closed myself off from the 9-to-6 world & put this sucker on, I heard a completely different recording jump out at me.  Halfway through, I became convinced it might even be the best album I’d heard in ages!  That’s the thought that stayed with me.  I’ve played it several times since and it keeps improving as the each layer is revealed.

There is a NYC downtown Celluloid vibe going on here.  Contortions do Ornette vs. Ornette does Contortions.  Prime Time without the guitars and add more No Wave.  It’s nearly impossible to grasp initially – other than those general surface observations – but when it does take hold (and boy, does it!), it takes you to a completely new and unusual landscape.  It’s a busy insect world of controlled chaos.  The music does not ebb and flow in the conventional sense.  Instead, it Exists - and grows upward and outward in stature.  It is Monumental.  It’s also the Last Exit album you always wanted to hear.

Bassist Noah Punkt makes an art of pedal worship, creating a sound world completely his own.  (He also recorded and mixed the recording.)  Sometimes I think this might stand up as a bunch of short pieces instead of three long ones – mostly because there are so many about-face changes; but how do you do that with music that is basically ONE LONG PEAK no matter how many sonic mood changes have been made?  This thing is its own beast and one would be wise to leave it alone.  Thankfully, Punkt is on intimate terms with wisdom.  It’s definitely a more challenging listen this way, but ultimately a more rewarding one as well.

There are moments where saxophonist Pitsiokos’ phrasing turns over on itself repeatedly, like an M.C. Escher drawing.  And there are moments where he is as spiritual as Coltrane ever was (if Trane played within the anti-structure of a No Wave improvisational band.  And maybe toward the end of his career he kinda invented that anyway.)  Mostly I think Pitsiokos is the ultimate band player here, goading the group into functioning as one multi-directional hive of constant activity.  It probably goes without saying that his playing is masterful throughout.  But there it is anyway.

Drummer Phillip Scholz propels everything constantly upward (rather than forward), pushing Punkt and Pitsiokos in ways that escalate tension and promote creative responses.  Sometimes he and Punkt form an alliance and create huge waves on which Pitsiokos has to try to remain afloat.  Again, the idea is to keep things in constant motion while maintaining a never-ending peak.  Entire nests of hungry birds are fed.  Ships are built and sent out to sea.  Books are written and studied and misinterpreted and reinterpreted.  Mountains are climbed and then chopped down and used for kindling and the smoke rises and creates storms that water the fields which grow the food which feeds the music which builds another giant goddamn mountain to be climbed.

To speak analytically about this music seems not only futile, but irrelevant.  At the end of the disc, the only thing that makes sense is to hit “play” again.  Cyclical, life-affirming, never-ending, wonderful stuff.

It is good alright, but doesn't deserve such unbounded praise. God, the images...

A typical Burris review - and I must admit that I like the way it is written. One might discuss the images but at least Tom has found his own style. As to the star system: One can always discuss that. And since it is made clear that the whole review is highly subjective, it's okay.

I expected that since I went from Hate to Love so rapidly in two listening sessions, I would eventually arrive at Like. But that didn't happen. Repeated listenings only solidified the love. 5 stars it is.

Thanks Martin. I am over-the-top in my support here, but it's genuine. All the best!

As I said, I find the disc okay (I even bought it) but far from worthy of hyperbole. One gets tired of these it-will-change-your life reviews and their predictable allusion to "chemistry" and "telepathy".

I hear ya. But I do consider it to be a monumental disc. It's all subjective anyway, as Martin said.

fwiw, the opening of "Torturer's Horse" sounds like it is borrowed or adapted from Roscoe Mitchell's "Nonaah."

I'm really enjoying it. I have a preference for the balls-out style of free jazz so this is right up my alley. As for the exposition - it's great, it is nice to read enthusiasm to act a bulwark against all the negativity we are pummeled with daily.