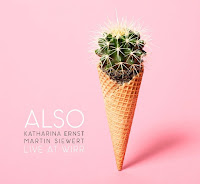 Austrian drummer Katharina Ernst and guitarist/electronics musician Martin Siewert are prominent members of the Viennese experimental scene. Both are gifted, multidisciplinary sonic artists. Ernst plays in the local post-techno quartet Ventil, collaborated with free-thinking improvisers such as Ken Vandermark, Kazuhisa Uchihashi and Terrie Hessels and has worked with street theater and dance groups. Siewet plays in the local art-rock trio Radian, collaborates with Mats Gustafsson in (Fake) The Facts trio (with local Viennese turntables artist dieb13), and has collaborated with countless sonic experimentalists such as Otomo Yoshihide, Elliott sharp and Christian Fennesz. He is also a sound engineer.

Ernst and Siewert began playing together as a duo in 2014 and already had composed piece for the Viennese Toxic Dreams theatre-performance company, “A Circus of Life”. Their debut duo album was recorded live at the Viennese Wirr club during the Open Loose Festival on June 2015. This short, free-improvised set, only 36-minutes long, offers six untitled, consecutive pieces, that all highlight the immediate, organic interplay and the versatile, imaginative language of this resourceful duo.

“One” is a head-on collision between pulse-less, aggressive drumming attack and the noisy, distorted electric guitar full sonic spectrum. “Two” continues this dynamics but suggests now a complex, cinematic soundscape where both Ernst and Siewert sculpt an intriguing, dramatic narrative, full of unpredictable, otherworldly nuances and colors. “Three” stresses the dense, claustrophobic atmosphere of the previous piece, but, for the first time, revolves around a pulse, a ritualistic and very  powerful one. But then it settles into an atmospheric, hypnotic soundscape on “Four”, more and more it is disturbed by weird electronics manipulations and percussive noises, until this slow-cooking exchange of sounds boils on the “Five”, with its addictive drumming and noisy aural excursions. “Six” concludes this masterful performance with peaceful and quiet sounds, sketched as sparse, subtle texture.