Angharad Davies is one of the most interesting violinists working in new music today. You are as likely to hear her playing the music of composers like Éliane Radigue or Jürg Frey as you are to find her playing with new music ensembles like Apartment House as you are to find her improvising with top notch musicians like Alison Blunt, Steve Beresford, David Toop, or the late Tony Conrad, to name but a few of her many collaborators. A pair of new releases focusing on the improvised duo does a fine job of showing the width and breadth of Davies’ playing. 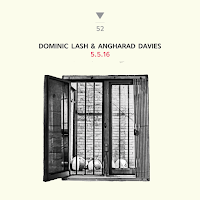 The first, simply titled 5.5.16, is a live performance from Cafe Oto with bassist Dominic Lash, released as a digital download through Cafe Oto’s Otoroku label. 5.5.16 is a singe track, named for the day it was recorded, that manages to cover an impressive amount of ground over it’s twenty-two and one half minutes. From Lash’s opening shimmer and the circular extremes of Davies’ bow, the album is a journey through the dark dream world of two fine musicians. Moments of extreme beauty are set against upwellings from the cold depths of the bass. The use of emptiness and negative space is top notch, no surprise from two performers steeped in the music of the Wandelweiser group. Detuned bass strings growl against the fingerboard, against Bartok pizzicati from the violin, against the space itself. The delicateness of the ending is remarkable, as light as gauze while still being as strangely suffocating as the heaviest parts of the piece. It would be nice to one day get a full album from these two. 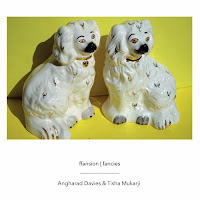 Ffansïon | Fancies is the new album from Angharad Davies & Tisha Mukarji. Released by Another Timbre, a label that generally does excellent work, and this album is no exception. This isn’t actually a duo album. It’s a trio with the third member being St. Catherine’s Church in South London, where the album was recorded by Simon Reynell. Mukarji’s piano is a perfect foil for Davies’ violin and they way they both interact with the acoustics in the Church is awe inspiring. The sounds emanating from the piano are both familiar and deeply alien at times as Mukarji wrestles an impressive palate of sound from the interior of the piano. “Ffansi III” sounds both deeply organic and entirely synthetic, the sound of a large grassy field fed through a modular synthesizer made of shark teeth and decaying electronics. But it’s a piano. And a violin. And a church. Easily one of the best albums of the year. Their last album came out in 2007. If we have to wait another nine years for the third, it will be worth the wait.

Hi David, thanks for the reviews. I love her sound, the control, the use of space, the timbre of her violin, her musical vision. This requires some open ears and a fondness of minimalism. Both good albums. Indeed recommended.