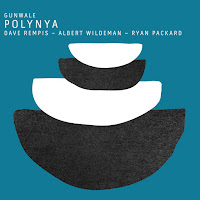 Albert Wildeman is Gunwale's secret weapon. He propels the group with roly-poly stabs on his bass, all accents and rhythmic tumble, that bring unfailing allegiance from drummer Ryan Packard & inspiration to saxophonist Dave Rempis. When Wildeman starts urging Packard onward, you can tell that Rempis is on cloud nine. Their early tentative steps, heard here, were recorded in Chicago at Elastic and the Hungry Brain back in January.

Packard also adds electronic textures to the mix, which is becoming more prominent in the sonic landscape of the city these days as well. Of the four albums I received for Free Jazz Blog's “Chicago Week,” all four feature a musician whose responsibilities include adding electronic textures to the canvas. Now this isn't a new sound, of course – but having an electric gurgle player on hand seems to be as essential as a drummer to Chicago bands these days. Frankly, I love it – mostly because provides the widest possible sonic palate for acoustic players to incorporate and react against.

The best example of this textural experimentation happens during “Bevel,” where Packard settles on a triad chord of feedback tones and Rempis joins in with a fourth, holding it via circular breathing technique. The chord drops as Wildeman enters the fray, giving a new air of seriousness – yeah, the beard-stroking kind – to the proceedings. The volume and intensity build until the tide finally rolls in, creating wave after subtle wave of rolling stew.

Wildeman and Packard perfect this rolling propulsion on the next track, “Liner,” accelerating it to a more manic pace. Rempis takes off for majestic heights as the groove becomes tighter. Around the four and half minute mark, a funk groove moves in unexpectedly – but Wildeman and Packard are throwing in unusual accents that give it just enough jolt to confuse your feet while sustaining the dancing in your head.

An excellent debut from a band that you'll want to watch progress before your eyes. Go see 'em on tour this month!