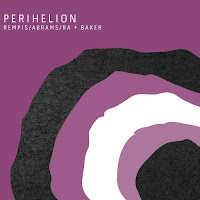 Perihelion is the new album from the trio of Dave Rempis on alto, tenor, and baritone saxophone; Joshua Abrams on bass and clarinet; and Avreeayl Ra on drums and wooden flute. It’s their follow-up to Aphelion, reviewed here by Tom Burris. Yes, it’s a massive double-album of free jazz, but it’s also achingly gorgeous, fierce as hell, and contains some of Rempis’s finest playing on record. In addition to the usual trio, Perihelion adds guest Jim Baker, keyboard and electronics, on the entire second disc. It sounds hyperbolic, but I needed this album in my life, partly as a document of the Chicago scene I never properly took advantage of while living there for 6 years. Living there, first with one newborn, then another, it was impossible to get out to shows. Weird how 6 years flew by, and suddenly we were leaving town knowing we never properly settled in. And now, here comes Perihelion.

The album consists of two live performances. The first is from August 2015, recorded at Elastic Arts. The second is from January 2016, recorded at The Owl. The main difference between the two is the addition of Baker, but both are just super fantastic.

Abrams kicks off “Enceladus” with a brief solo. Rempis joins in a bluesy, soulful mood, carving the suggestion of a melody out of his solo. By the time Ra joins, there’s a shape to the track, and Rempis and Abrams start to turn up the heat. Once the trio is about 5 minutes into “Enceladus,” everyone’s moving, and the pace doesn’t really let up for another 40 minutes. That’s not to say the tempo stays at that speed, but it’s the pace of ideas that doesn’t let up. Abrams is adept at using space and silence to craft evocative lines. There are more shades here than, say, early Ballister albums (although truthfully that band has evolved into something of an oddball cousin to this trio). Rempis really has reached some next-level phase of playing. On disc two, “Cassini Division” and “Pan and Daphnis,” his opening runs combine a full-throated baritone growl with a lyricism that deepens the whole band’s contributions. About 5 minutes into “Cassini Division,” Baker and Abrams perform a fluid duet, accompanied by Ra shading in the space with light cymbal work. Rempis comes back with another soul-infused line that echoes some of Baker’s runs. As on Aphelion, this group plays with almost telepathic interplay. Rempis and Abrams chase each other through a sing-song duet that gradually builds, with Baker joining on high, ringing chords. The album closes with the relatively short “Pan and Daphnis.” Each player gradually slowing their play into long, quiet tones that seem almost like a molasses-slow replay of the track’s early skittering improvisation. Some albums just connect with you in a way you didn’t anticipate, and this was certainly one. Whatever the reason, the band itself or the timing of hearing this, it was just what I needed.