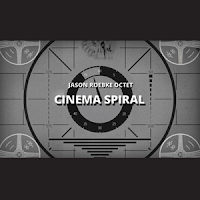 Perhaps the most efficient way to sample Chicago’s wealth of top-notch musicians would be to attend a gig by the Jason Roebke Octet. A veritable who’s-who of scene-leaders, the Octet comprises Greg Ward on alto sax; Keefe Jackson on tenor and sopranino saxes, plus contrabass clarinet; Jason Stein on bass clarinet; Josh Berman on trumpet; Jeb Bishop on trombone; Jason Adasiewicz on vibraphone; Mike Reed on drums; and, of course, Roebke himself on bass. As busy as every one of these guys is—they’ve probably all hit our blog’s pages in the two years since the Octet’s debut, High/Red/Center (Delmark, 2014)—each one brings to Cinema Spiral the full force of his power, thoughtfulness, and individuality.

While on the surface these seven tracks offer plenty to enjoy—from tight group arrangements to masterful solos to killer freewheeling group improvisation—you might need a few listens to really appreciate Roebke’s vision here. There’s a certain slipperiness to the album, a clever ambiguity that proves Cinema Spiral to be an apt title, reflecting as it does the music’s play with the line between a whole gang of film-related binaries: community and isolation, motion and stasis, parts and whole, even predetermination and improvisation. Expectations, in other words, aren’t much use.


The album opens (“Looking Directly Into the Camera”), for example, with swells of sound, tightly controlled and full of potential energy, but only twenty seconds in abruptly reroutes into a lengthy halting bass solo. As the other instruments join back in—starting with hair-raising bowed vibraphone—it becomes clear that Roebke’s structural design extends all the way across the album’s seven tracks, each one with its own quality but intimately connected to the next, like scenes in a movie. It’s not until the very end of track two, the gently swinging “Focusing,” that those opening swells return, a motif that both helps maintain the larger organization of the piece but also toys with our sense of forward movement: how did we get back here?

According to Greg Buium’s excellent and highly recommended in-depth Point of Departure feature on Roebke, the bassist calls motifs like this one “little vignettes.” Elsewhere the vignettes are harder to pin down, rising subtly underneath the matrix of group improvisation and then receding so that, kaleidoscopically, all the tumbling tonal colors pull together for just a moment, before slipping apart again. In describing his compositional process, Roebke cites Herbie Hancock’s Mwandishi as a model: “It’s not like everyone’s improvising, and then everyone’s playing written material. The way that Herbie Hancock was doing this stuff, it was like, everybody’s improvising, and then all of a sudden Julian Priester and Bennie Maupin would play some line as sort of a background, to nothing. It was not a background. It was just a thing—that somebody took and then went a different direction with it” (quoted in Buium).

Though it’s rewarding to listen for and learn to recognize these cues, as I said above, you don’t have to in order to enjoy the music. The ballad “In the Moment” features some gorgeous trombone work from Bishop, as well as another tasteful bass solo. There’s a great dual feature for bass clarinet and sax on “Getting High.” “People Laughing” starts in hysterics and somehow finds its way to whispery extended techniques. As the album climaxes it delivers my favorite two tracks last: first the grooving “Waiting,” which puts the segue model to maximal use, and finally “L’Acme,” a lush 6/8 stunner where expert ensemble improvisation meets solid writing in a perfect, fleeting balance.
Paul on Friday, October 07, 2016
Share