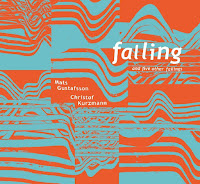 Failing and 5 other failings may be the most intimate and maybe even the most provocative musical statement that Swedish sax titan Mats Gustafsson and Austrian electronics player Christof Kurzmann have recorded so far. Ken Vandermark, who wrote the illuminating liner notes, suggested listening to this album as “abstract hymns for the left as we are faced with the advance of the right.” Either way, this album offers a fascinating work of two restless individuals who always search for new ways to challenge themselves, both are experienced and resourceful improvisers who understand deeply the essence of music of the moment.

Gustafsson, who plays here the slide, tenor and baritone saxes and adds electronics, and Kurzmann, who plays the ppooll software, sings and live processes some of the improvised events, collaborated sporadically before (on Kurzmann's retrospective, Then and Now, Trost 2014), but this is their first duo album. All six pieces were recorded as open-ended improvisations at Martin Siewert's studio in Vienna, during two days on May 2015. A section from each improvisation that was considered successful was cut and marked as a ‘Failing’ composition.

Vandermark, a close collaborator of both Gustafsson and Kurzmann, notes on the state of mind of both musicians. “While looking at the state of global politics in 2016, the idea that there has been social progress in the last four decades seems, at best, questionable. And, in retrospect, it would seem that the intersection between adventurous art and music with mainstream society was much more common in the 1970s than today.” He claims that today’s creative impetus, in cinema or in jazz, as an open-ended art form, is often preoccupied with replicating ideas from the past instead of challenging or rebelling against such conservative ideas.

Gustafsson and Kurzmann improvisations-compositions sound as answering the artistic void that Vandermark is troubled about. Both employ their idiosyncratic palettes of sounds to suggest intriguing strategies that respond to what happens right now, in the studio but resonate the global atmosphere outside the studio. Both articulate their shared sonic concerns and fears, but more important, offer their compassionate and determined response: stand up, speak up, loud and clear, and if you fail, fail again, fail better.

Gustafsson employs his wide range of extended breathing techniques to create cyclical rhythmic phrases that do not accumulate to any recognizable pulse, and alternates with dark rustling drones, all played with an impressive sense of reserve and moving lyricism. Kurzmann creates with the ppooll software rich spectrum of expressive sounds, including processed sonic events. Surprisingly, these sounds radiate fragile human emotions, soaked with a disturbing sense of melancholy. Vandermark concludes that Gustafsson and Kurzmann do not attempt to recreate something that sounds like the past, nor attempting to be futuristic and artificially avant-garde. Their music of the here and now may reaffirm a poetic epigram of a fellow-conspirator Keiji Haino: “memory is just an obstacle in the pursuit of a perfectly screaming self.”