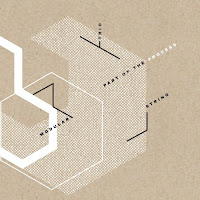 First things first: Poland’s Modular String Trio are not actually a trio. While the strings themselves are handled by Robert Jędrzejewski (cello), Jacek Mazurkiewicz (contrabass, electronics), and Sergiy Okhrimchuk (violin), it is additional member Łukasz Kacperczyk who makes up the “modular” part of the equation. With the help of Kacperczyk’s modular synthesizer, the group’s gnarled, texture-driven improvisations are processed, altered, and ultimately splintered into a wide range of electroacoustic permutations.

Of course, not every track here is dominated by electronic manipulation. “Mst 01.00.05” is largely untouched, aside from the occasional gurgle, squelch, or high-pitched whine that nudges its way into the mix. Even without the synthesizer, however, it is as spectral and uncanny as a white sheet flapping on a windless night. Another synth-less piece, “Mst 01.00.08,” recalls the Eastern European folk-music tradition in the way that Jędrzejewski’s cello and Okhrimchuk’s violin interlock, twin lamentations that, if heard issuing from within the immense Białowieża Forest of Poland, would surely cause a sense of apprehension to spring up.

Thanks to Kacperczyk, however, the tonal possibilities of the Modular String Trio are expanded even further. Take the thumping, lurching, mechanical pulse that launches “Mst 01.00.03,” or the way that the strings are processed and pushed to the edge of the mix, broadcasts from some distant, dying planet. Better yet, listen to the insectile clicks-and-whirrs that accompany Mazurkiewicz’s throbbing bass on “Mst 01.00.04.” For the most part, the tracks on Part of the Process are minimal - ghostly negatives of the more sonorous movements and phrases that a more traditionally-minded string trio might produce. 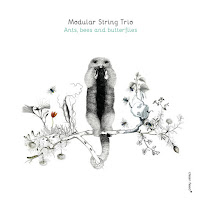 The Modular String Trio’s second release of 2016, Ants, Bees and Butterflies, is not a departure, but rather a continuation of the otherworldly explorations of the first. From the opening piece, “Mst 02.00.10,” we are introduced again to the sometimes-scraping, sometimes-moaning strings, and again to the eerie, echoing tones that Kacperczyk conjures up with his modular synth. At times, it even seems that the melding of electronics and acoustic instrumentation here has become more seamless - on “Mst 02.00.11,” for instance, Okhrimchuk’s violin occasionally rises up, brushing against a high note that, as quick as its released, decays into a vanishingly quiet beep, the synthetic residue of sound. These tiny transmutations are all over the place in the music of the Modular String Trio, and they make for an enthralling (if at times unnerving) listening experience.

As on Part of the Process, not all of the pieces are so blatant in their use of electronics. “Mst 02.00.12” is driven by a moody, insistent bass-line from Mazurkiewicz, while Jędrzejewski and Okhrimchuk move from short, melodic phrases to extended wails. They are never quite in conjunction, however, resulting in a dialogue that always seems to be on the verge of sagging in upon itself. On “Mst 02.00.15,” the modular synth returns, but it takes on a slightly different aspect: instead of beeping or clicking, it emits long arcs of sound - almost like emergency sirens howling above a decimated landscape. Meanwhile, the strings are the voices of those who couldn’t make it out in time: creaking, whimpering, and eventually receding into nothingness. If these images seem bleak, that’s because the music of the Modular String Trio doesn’t really evoke joyful images. You won’t be bobbing your head or dancing around your room when you hear these two recordings, but that’s not necessarily a bad thing. This music is for inward glances, for those moments when you need some sounds to map out your melancholy.