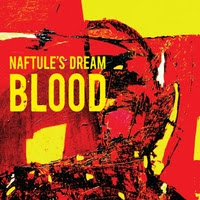 
It’s been about 15 years since Naftule’s Dream’s last studio album, and that’s been long enough, if not too long. The band was an early contributor to Zorn’s Radical Jewish Culture Series on Tzadik, and they’ve always played an impressively lean take on modern klezmer, keeping to a small lineup that zips through genres a la Naked City. The current band is Glenn Dickson (clarinet), Michael McLaughlin (accordion), Andrew Stern (guitar), Gary Bohan (trumpet, cornet, and flugelhorn), Jim Gray (tuba), and Eric Rosenthal (drums).

Blood opens with an insistent ride against a patient, almost half-tempo melody. The title, “Sitting in Some Train Watching the Tuscan Landscape Go Speeding Backward,” sets the mood exactly; it’s a relaxed throat-clearing, the gentlest of reminders before the band returns in full force. “Aby Kirly the War Hero” showcases a classic klezmer style, with Bohan singing the lead on cornet, over a hot, swinging rhythm section. “Calabria” opens with Gray’s loping tuba groove backed by subtle effects from Stern and the gentlest of pulses from Rosenthal. Gradually, McLaughlin’s asynchronous accordion solo gets layered over these simmering ambient textures, creating a tense, urgent mood.

“Boss Shabbos” is the likely standout. Setting swing against klezmer against free improv, each section shaded with technical beauty, this is exactly what made Naftule’s Dream such a natural fit for Tzadik. After a swinging opening, the band opens up the middle section for a McLaughlin and Bohan duet, blending melancholic accordion and a lovely cornet solo, both of which melt into a final, jagged free section that slowly fades away. “Turkisher” features some of Dickson’s finest playing on the album. He takes a long solo early in the song, leaping through octaves and runs. He’s followed by a brief, but welcome, drum solo, with Rosenthal eventually leading the band into a rough-edged, rousing finale. “In Search of Her Lullaby,” the gentle closer, serves as the counterpart to “Sitting In a Train…” The two create a kind of curtain-opening, curtain-closing effect.

Blood is certainly a welcome return. I just hope it’s not another 15 years before we get the next album.