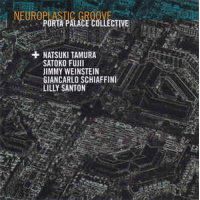 In 2014, Porta Palace Collective released their exhilarating, inventive debut. Their newest, Neuroplastic Groove, expands both the number of players and their breadth-of-vision, resulting in a dynamic release that is sure to garner new fans. The central quintet of the Porta Palace Collective consists of Johnny Lapio on trumpet, Giuseppe Ricupero on tenor saxophone, Lino Mei on the Fender Rhodes, Gianmaria Ferrario on double bass, and Lilly Santon doing vocal work. Here, the Collective is filled out with the extraordinary Satoko Fujii on piano, Giancarlo Schiaffini on trombone, Jimmy Weinstein working the drums, and Natsuki Tamura on trumpet and, well, toys. As you can see, it’s a big group, and there are a lot of opportunities for things to get cluttered and overly-complex, but the Collective (under the direction of Schiaffini) toe the line perfectly between composition and all-out improvisation.

Take “Fantasy,” which starts as a drunken rush of big-band theatrics, but quickly unspools into a hectic, multi-layered dash, led by Ferrario’s precise bass. Each instrument seems to come at you from a different, unexpected angle, and it gives you the feeling of making your way through a loquacious crowd of strangers, all of whom are chatting in a language you can’t quite understand. It’s inexplicably comical, but nonetheless exciting. “Micro Texture and Low Cluster” stays true to its title, delivering a blend of acerbic trumpet-work, rasping murmurs from the reeds, and rumbling bass-work. Overlaid atop this tonal mass is Fujii’s relatively straightforward piano and Weinstein’s rolling percussion, which both work to tie the textures together and give them shape. Lilly Santon is a delightful addition to the group: she illustrates her range on “Leaders” - moving from operatic arias to scat to spoken-word to hushed undertones that, frankly, make my hairs stand up, she injects the Collective with a dose of theatricality. On that same piece, by the way, you can finally hear the sound of Tamura’s squeeze toys. I won’t say that they’re my new favorite instrument in jazz, but the fact that Tamura makes them fit at all is a testament to his ability.

The final composition, “Come Se Fosse Autunno,” pulls all of the best elements of the Porta Palace Collective together into one package. You’ve got Lino Mei’s funky, kaleidoscopic Fender Rhodes, the vocals, the excellent blend of bar-room blues with manic free-form explorations, and even a percussion solo! On the whole, Neuroplastic Groove is a synthesis of various musical traditions and styles, but it never devolves into mere facsimile; in fact, as the title of the album suggests, the Porta Palace Collective have produced a collection of music showing that jazz, just like the human brain itself, can always form new connections, new pathways to parts of the musical spectrum that might have been assumed too distant to access. A great recording, and highly recommended!
Paul on Saturday, October 01, 2016
Share