Peter Brötzmann: An Update on the Latest (Day 3)

Today we wrap up our update on the prolific Peter Brötzmann, may the creative juices keep flowing! 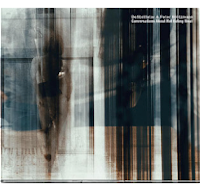 Defibrillator is a project by the Polish brothers Artur and Sebastian Smolyn on electronics and e-trombone, and German drummer Oliver Steidle (of Soko Steidle and Die Dicken Finger fame). Steidle has been a frequent collaborator with Brötzmann recently, mainly as a duo. Using a quartet is new and even for those well-acquainted with his music, there’s much to discover. On “Uterine Prolapse“, the best track on the album, (opening again with the call to arms) there’s a short Kim Fowley quotation (“Nutrocker“). On the whole, the music resembles Brötzmann’s work with Full Blast or Keiji Haino. On occasions, his saxophone has difficulty projecting over with the heavy electronic debris of the Smolyn brothers, trying to maintain a distinct voice and not be drawn into maelstrom.

Conversation About Not Eating Meat is available on CD. 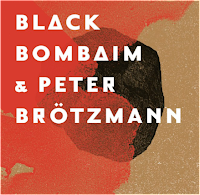 Brötzmann’s contributions on this album are different to his other appearances in this round up. Black Bombaim are an instrumental psychedelic hard rock band from Portugal (who have also worked with Rodrigo Amado) and it seems that Brötzmann has finally answered Bill Laswell’s prayers. In the 1980s, when the Wuppertal beast played with the famous producer and bassist, Sonny Sharrock, and Ronald Shannon Jackson in the free rock formation Last Exit, Laswell wanted him to join metal bands like Motörhead, but it never came to be - thank God (although I like Motörhead). Brötzmann said that for him such music "got too boring (because) the rhythmic conceptions of the band" soon loses its interest. However, listening to this album is proof that sometimes there‘s only a thin line between improvising jam bands and free jazz. Brötzmann simply adds his typical sound to Black Bombaim’s monochrome and monolithic excursions. The result is a pure rock album, with straight ahead drumming, distorted bass, wah-wah guitar solos, reverberant sound and a wild, angry, and uncompromising Brötzmann as the icing on the cake. As if Queens of the Stone Age were going ballistic. 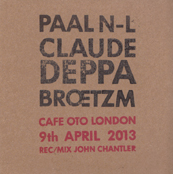 Last but not least, there’s Brötzmann’s trio with Paal Nilssen-Love and South-African trumpeter Claude Deppa, who has worked with Chris MacGregor’s Brotherhood of Breath and Louis Moholo's Dedication Orchestra. Deppa’s music includes African, world, and Afro-Cuban jazz elements, as well as soul, funk and European chamber music. In the free jazz sector recordings with him are rare, which is a real pity since he is the actual sensation on this album, recorded when Brötzmann and Nilssen-Love were a long-standing team. Deppa adds fresh colors and ideas to the duo. In the first (and longest) track he growls and gnarls in the background, then buzzes like a bee while Brötzmann casts wide, elegiac lines. Deppa has an excellent technique which reminds me of great bebop trumpeters, and a lush and pungent tone. The duo passages with Brötzmann are beautiful. One wonders why they hadn‘t played together before. The album is marked by enthusiastic playing, and it’s also great fun.

Brötzmann and the other musicians sell the album at concerts. I’ve included it for the sake of completeness (and I like it a lot). It might seem hard to get but wherever you find a copy don’t hesitate to buy it.

Watch a very short amateur video from the gig:

Available via www.instantjazz.com or the label websites. Black Bombaim and Conversations About Not Eating Meat can be purchased at downtownmusicgallery.com.
Paul on Thursday, October 20, 2016
Share