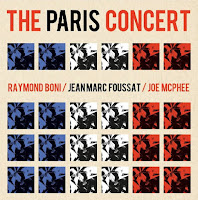 American saxophonist and trumpeter legend Joe McPhee met by chance French guitarist Raymond Boni and sound engineer and analog synthesizer explorer Jean Marc Foussat at the American Center in Paris in 1975. McPhee was enjoying, at that time a timely, a justified acknowledgment of his creative powers in Europe. During the same year, Werner X. Uehlinger founded the Swiss label Hat Hut, also after a chance meeting with McPhee, with a declared goal of documenting his work.


This meeting of McPhee with Boni and Foussat led to a long and deep friendship between these unique musicians. McPhee kept playing and recording with Boni throughout the years in different configurations. The first recordings were for the Hat Hut label, with Boni and fellow French sax and clarinet player André Jaume (Old Eyes & Mysteries, 1979; Topology, 1981; Tales and Prophecies, 1981; Oleo & Future Retrospective, 1982) . Foussat recorded McPhee music and the two performed together.


The Paris Concert celebrates the 40th anniversary of the chance meeting at the American Center (now long gone) in Paris. Boni, Foussat and McPhee performed at a private house in Paris before 15 invited guests on May 13, 2015. A lot has changed since the first meeting and as McPhee said: “‘The City of Light’ strives for a new meaning in a time of great challenge. The world has changed and we all walk naked on a razor’s edge”. This recording is released as limited-edition of 400 vinyl copies, with download card the features the encore that is not featured on the vinyl version (but is seen in the video below).


Obviously, all three musicians are experienced free-improvisers, but all three offer highly personal approaches to this kind of music of the moment. Boni's guitar lines are rooted in the jazz tradition, angular and sensual, marking possible textures architectures. McPhee's playing is totally free, more provocative, sketching short, poetic ideas, each one can elaborated to an entire composition. Foussat links all with his otherworldly, vintage electronic sounds and noises or his imaginative usage of processed voices, often sounding as a tortured horn. The emphatic, slow-cooking interplay intensifies and gets rougher, even violent, on the second extended piece, “Paris 2”. Boni's guitar lines now sound spiky, distorted and fractured, McPhee's fiery blows are fast and dense and Foussat charges this tense commotion with alien, industrial atmosphere. But as the three musicians reach the short, final piece their deep understanding and friendship shines through the music. “Paris 3” still sounds strange, but strange and arresting as a song of some mysterious, rare species of birds. Beautiful and surprising, innocent and frightening, profound but light and rhythmic. Great music of the moment.