Wrapping up solo week (and yes, you can expect a Duo week coming soon) we have two folks known to the blog: Catherine Sikora and Paulo Chagas. 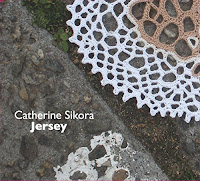 Saxophonist Catherine Sikora spent some time living in the Garden State and knows about the unbridled joy of waking up to a New Jersey sunrise and the colors that only a New Jersey sunset contains. It is such feelings, I assume, that inspired her solo album's title. However, it's a note from a former neighbor in Queens, NY printed in the inner gatefold of the CD's digipack thanking her for practicing the saxophone that sets the tone. A quick listen to the album and you can hear for yourself how Sikora enthralled, rather than enraged, her anonymous neighbor.


'Ripped from the Headlines' begins the album in an unhurried manner. As the lines build upon each other, there is a stream of consciousness logicality to the phrases that lead the listener from one thought to the next. From track to track, there is an arc that suggests that instead of miniatures, tracks breaks are more like deep breaths between shifting, deepening, arguments. Track 3, 'Firefly Night' introduces more rapid phrases, while on track 4 'Pistol Grip’ there is an overall tightening and increasing intensity of her phrases. As the album continues, the tempos and techniques used to express the spontaneous melodies vary, but the general pattern is set. Sikora has invited us into her musical world, and like the neighbor from Queens, it is our good fortune to be in its midsts.

Jersey, clocking in at 42 minutes, is a wonderful document of a truly under-recorded musician. If you can, check out this album as well as some of the others she's played on. 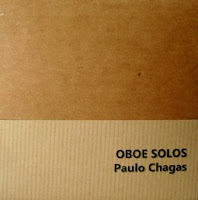 The oboe is not a common instrument in the free jazz world, and my own references to it seem rather limited ... I think of  Karl Jenkin's circa Soft Machine's Six, Paul McCandless in early Oregon, and well, that's about it (please use the comments to share other examples) So, Portuguese woodwindist Paulo Chaga's Oboe Solo recording is somewhat new aural territory for me and it's one that is well worth delving into.

The double reed instrument has a timbre reminiscent of a Bb clarinet but otherwise it is its own creature. Chagas mixes together seamlessly experiments with embouchure, tonguing, and the instrument's natural range, with often quite lovely melodies. Track 1, 'Demagogy' starts off with gentle multiphonics and slowly unfolds into 'Inner journey.' Track 5, 'Playing chess with myself' features a forlorn melody, folkish in its simplicity, which also brings with it a poignancy. Track 6, 'New astrology for smart people,' is bubbly - literally, and on track 8, 'To improve mental elasticity,' you may think a Tuvan throat singer is warming up! The sonority of track 9, 'Pocket nirvana,' is seemingly a rebuke of the last track, serene and melodic, drawing on middle eastern inflections and classical phrasing. The range of Chagas' playing is quite wide!

It's fascinating to hear the oboe pushed and pulled to its limits by such a restless and thoughtful improviser.