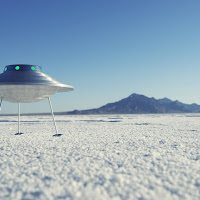 Fields of Flat is the debut from Trio Red Space, a new trio led by drummer Tim Daisy, featuring Mars Williams on soprano and tenor saxophones and Jeb Bishop on trombone. It’s a brisk album, with 5 tracks clocking in at 29 minutes total, but each song is packed so tightly it hardly matters.

All three are veterans of free jazz, and the album is rich with swirling ideas anchored by Daisy’s compositions. I’ve long admired Daisy’s ability to compose these melodies and counter-melodies that seem to blend a martial, folkish feel with uptempo swing. That’s evident on every track, beginning with “Pro Flowers.” Opening with a Williams solo, the trio come together on the snappy melody before spinning apart in a winding loop of improvisation and restatements of the theme.

In a sense, the album has the feel of the classic Ornette Coleman quartet, reduced even further by eliminating the bass. Bishop is outstanding, as always, leading off “Mind, Space” with a solo that previews the song’s languid explorations. There’s a fleeting theme that bubbles up to the surface throughout, but “Mind, Space” feels more like a reflective mood piece.“Coal Dust” kicks off on a strong martial theme from Bishop, with Daisy doubling on snare and cymbals and Williams soloing hard over top. The trio shifts abruptly into an open improv section, with some excellent playing from Bishop. Towards the end, the theme returns, first with Bishop and Williams doubling over Daisy’s solo, then with all three in unison.

“Fields of Flat” opens with Daisy on radios. Gradually, Williams and Bishop enter with long tones, creating something of a staticky call and response. It’s the shortest track, but taking the album as a whole, it fits nicely in the overall ebb and flow, leading directly to a Daisy solo that starts the album closer, “Onwards.” Daisy’s musicality on the drums makes him one of the best, especially in improvised settings. And his playing on “Onwards” is both powerful and lyrical. He really leans into a heavy swing during Williams and Bishop’s dueling themes, then crashes his way through the improvisations. It’s a thrilling, rumbling closer, with Williams’s saxophone screaming nearly to the end. In the very final 20 seconds, the band quickly drops to near-silence, finishing the album with a brief, gentle fade to close.