Catching Up With Tilting Converter

Tilting Converter is the label run by Stockholm-based musicians Patric Thorman and Joe Williamson. At this time, the label has only three albums available, two of which will be reviewed here. The music that Thorman and Williamson produce (both are members of The Ägg, and Williamson is the vocalist and bassist of Receptacles) defies easy categorization, with even the relatively wide-ranging descriptor “free jazz” failing to completely encapsulate what’s going on. Despite this slipperiness, The Ägg and Receptacles produce decidedly concrete music, music that either captures the commotion of a small-parts factory on fire (as with The Ägg) or music that marries the listlessness of punk-rock with the unpredictability of improvised jazz (Receptacles). 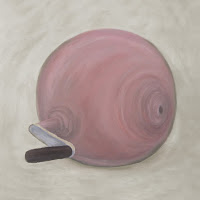 The self-titled debut from The Ägg, released in 2013 by Found You Recordings, was the sonic equivalent of a complex piece of machinery that has been left running too long - stressed to the point of overheating, the tiny cogs and belts start to whine, melt, and then bleed into one another. With four drummers, three electric bassists, and three electric guitarists, The Ägg made an undeniably massive sound, but it never descended into incomprehensibility. Each player was an interlocking plate in a tectonic system that hinted at rupture without ever collapsing completely.

Imagine my surpise, then, to hear the first track on The Ägg’s newest release, Machines. In terms of player configuration, the only new development is that Raymond Strid is gone, leaving just three drummers (just). From the outset, however, it’s clear that the group have taken a different musical approach. Gone are the bulbous basslines, the screeching guitars, and the near-overwhelming barrage of percussion. In their place are sounds that are decidedly more low-key; on Machines, the guitarists have seemingly unplugged from their amps, leaving muted notes that quiver rather than quake. Likewise, the percussionists have reined in their rhythmic deluge, opting instead for wooden resonances that clatter along with all the insistence of covered wagons on Old West trails.

Interestingly, this acoustic approach somewhat muddies the distinct signature of each player. While the self-titled album contained pieces in which lines occasionally mutated and pushed restlessly against the constraints of the compositions, the tracks on Machines often seem to lack variation. Listening to the first ten seconds of each part of “The Rise and Triumph of Technology and Reason” will give you a good idea of what to expect from the rest. That’s not to say that there’s no improvisation or transformation going on here, but simply that the sonic properties of the group’s newfound approach have subdued and softened the individual voices. In the same way that asking a choir to sing in a whisper will result in an indistinct blur of breath, asking The Ägg to unplug results in a sound that, while not neuteured, is definitely not as unrepentantly turbulent as the work that came before. In this way, Machines could be considered free-jazz ambient - just put it on and let the odd (and admittedly novel) textures wash over you. 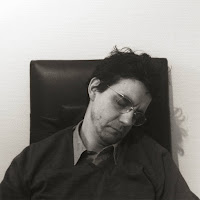 What if Captain Beefheart had cut his teeth listening to The Fall instead of Howlin’ Wolf and Bo Diddley? The result might have sounded like Receptacles’ new album, Freedom From Error, a near-perfect example of the “jazzed up punk shit” that Mark E. Smith once preached about but never quite produced. Consisting of bassist/vocalist Joe Williamson, guitarist Anton Toorell, and drummer Dennis Egberth, Receptacles is either a jazz group with rock leanings, or a rock group with jazz leanings, or something else entirely. Just listen to something like “Sounds Like Shit,” with its thudding percussion, jittery, overcaffeinated bassline, and oblique stabs of guitar; it’s too odd and misshapen to be taken for a straight-up punk song, and too stiff to capture the the open-ended fluidity of jazz. A central component of Receptacles’ unpindownable mass of writhing, twitching sounds is the voice of Joe Williamson. Like the aforementioned Mark E. Smith, he spits out words with a deadpan, sing-speak delivery that is as acerbic as it is (occasionally) downright funny. On tracks like “Camping,” he simply lists the supplies needed for a successful (you guessed it) camping trip, while “Parkour” is a chance for him to espouse the benefits of the titular activity. Behind all of Williamson’s offbeat musings, the band carries on: Anton Toorell is the most distinctive musical voice here, with his jagged slabs of guitar noise that often seem to take Dennis Egberth’s throbbing, motorik-indebted time signatures as mere suggestions. Likewise, Williamson is no slouch on the bass; playing with a stuttering, nervous energy that contrasts nicely with the disaffected inscrutability of his voice, he provides a reliable anchor for Toorell’s more manic moments (the super-charged explosiveness of closing track “Uppin’ the Ante,” for example). While you could get into endless debates trying to figure out just what kind of music this group makes, it would likely be a fruitless endeavour - I doubt the band themselves know. As long as you’re receptive to, uh, Receptacles, you’re sure to have a good time - and you might even learn a thing or two about camping!