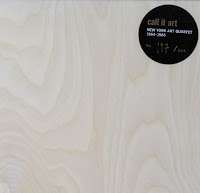 This is 1964. While John Coltrane with his classic quartet, was accelerating his pace towards a new-more free, more spiritual, individualistic and collective at the same time-approach, fire music was just right at the corner. At the same time, the avant-garde (which the New York Art Quartet [NYAQ] had close connections with) was closer to the origins of the new sounds than ever before. Those were the years, and a few after that, of the peak of the counterculture and a time that demanded - pointed out to - a freedom of expression that made available any kind of artistic absurdity. Following this trajectory, youth were rejecting “old music” like the blues, and kept falling in love with the new sounds of the day .

Not long before - to paraphrase Herbert Marcuse - the music of the soul became the music of salesmanship, overshadowing the collective artistic thinking and, in particular, the collective improvisation, that were the main drivers behind the prevailing ethos in what-to-do and what-to-play. In the studio and, mainly, playing live, amazing, skilled, visionary artists were leading things in various directions. Some of those were the guys within the NYAQ.  Among musicians, who were also gifted soloists, there existed a strong sense of  alltogetherness, which was enabled by the freedom of being at the margins. The margins - and often out of them - of white and black mainstream culture, the social and political climate was fertile for a radical shift in all ways of thinking and practices-artistic too.

This, definitely incredible, box-set makes a claim ( “call it art” ) that raises the stakes high. No arrogance here, just the passion, the will and the work of a small label of acolytes, Triple Point Records, to ensure that another piece of, perhaps forgotten art, will see the light of day, will be heard by those with ears wide open. The main man behind it is Ben Young, the guy who put together Albert Ayler's box set for Revenant Records. Having listened, read and touched this box set myself, I can assure you that there's no way of really complimenting the love behind it and how important was for me as a listener of free thinking music. Mr. Young has done it again. Not that we expected anything less. The other two releases of this small label again are here to prove all the above and, most importantly, are here to make a strong statement about how to present great music. I know that this paragraph may sound a bit over the top, but once you hear the material, you read the words, you touch all that's included, the passion of the makers will resonate inside you. Alongside the constant revelation of free thinking art, this is what we totally need right now.

This very beautiful, minimal looking birch wood box, which includes a clothbound book, nine sides of vinyl, dozens of photos, and many small memorabilia, is the product of many hours of research. It is very interesting to point out that the rise of archival material during the last five to ten years coincides with the new rise of the vinyl market. Not a bad coincidence for all of us...Made in just 665 (not even 666...) copies, it also brings to mind its main problem: its too expensive. Of course, I do not know the cost of producing it, cannot measure the many hours, days, weeks needed for research. We live in a capitalist economy, everybody has to make money to put food on the table. And I'm not adding the value of labour needed for production. Nevertheless, its price makes it a privilege for a few to own it, so, practically, it is a class issue unfortunately, and I cannot find a way to surpass this thought.

Going back to the core of Call It Art, the music and the people involved in it, there are some artists that need to be mentioned. The stories of all those involved are already well known, so I will avoid getting into details. The great and personal favourite Amiri Baraka ( I prefer to write about him with his chosen name) was a champion of the new thing (as well as bebop before that) right from the beginning. He had already participated in NYAQ's first album by reading Black Dada Nihilismus and he was familiar with what the collective was trying to formulate. His very recent collection of poems called S.O.S., that sits next to me, is a definite proof of the reasons I consider him one of 20th Century's great poets. Milford Graves, one of my favourite drummers, is totally associated (in my mind at least) with free jazz and the polyrhythimc barrage of sounds, first heard from Sunny Murray on the ESP recordings. John Tchicai was a constant source of free jazz expressionism with an ear for melody and structure. His playing in one of my favourite free improv recordings, the second for the I.C.P. Collective, proves he was capable of anything. Roswell Rudd already knew and had played with Tchicai, most notably in Shepp's Four For Trane LP. The rhythm section of Don Moore and J.C. Moses was a very tight and compact duo having forged this relationship during their stay with the New York Contemporary Five. Everything was in place, ready for the music to be heard.

Now that I think of it, such an overwhelming edition, full of unheard recordings, can make you feel saturated by the sheer power of the material, possibly rendering you unable to judge it accordingly and objectively. As early as bebop jazz had confronted and battled against all the orthodoxies of what jazz “should be”. As I already mentioned the key word for many musicians was collective thinking and it's way of expression collective improvisation. But, it's not that anything you will listen on all sides of vinyl is improvised. You can hear structure, you can distinguish melodies. Surely, I'm not pointing out anything new here, the music is not as radical as the ever transforming Coltrane sound of the period or other ESP recording of the same time. But that's not the point-of merely comparing. The recordings of this (will write it once more) incredible box set stand on their own  as another message in a bottle (finally read) of a time and a place. You will listen to live recordings and different takes. They are all accomplished pieces of  music. Alongside improvisations you will find pieces like Bird's “Mohawk” and tunes from members of the collective. Graves surely stands up, just like his constant flow of metal sounds never stops or fails. He can definitely swing, put the listener into his groove, and he can also drive himself into percussion ways akin only to improvisers. Every time he is one hundred percent himself. One can mention Ornette and his quartet's of the late 50's and early 60's and provide a very precise audio idea of what is heard. The poems-as strong interludes-of Baraka have a strong edginess and ground the recordings with the black struggle of the time-and how contemporary they feel when heard in 2016. In an overall look (from someone with no technical knowledge like me) the improvisations are reaffirmed from the strong presence of structured compositions in these recordings and vice versa. This is a wild combination, a rope dancer's balance that never fails but keeps going on, covering the distance. And that's really something.