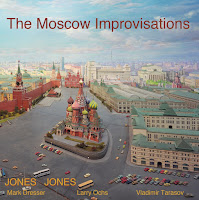 In 2009, Mark Dresser (bass), Larry Ochs (tenor & sopranino) and Vladimir Tarasov (drums) met for a trio performance at the Moscow Biennale of the Arts, where Tarasov had a retrospective exhibition of his installation art. For those interested, some of those are to be found in the pictures below. Tarasov's music and his installations may share a common sense of creativity, but they couldn't be more different in the actual delivery of it: the installations seem to be orderly, precise and measured, his drumming is immediate, authentic and straight from the heart.

He is also a remarkable percussionist, very angular and unpredictable, with a love for deep rumbling sounds and high-pitched little cymbals, a scope which allows him to create his own personal sense of drama. And interestingly, Dresser goes along with it. His bass-playing is more muscular and raw than on other performances, with an almost deliberate choice to avoid anything that may sound fluid, even when playing his bow in the opening track, it scrapes and saws over Tarasov's thundering toms. The rhythm section plays in abrupt bursts with bouts of energy. And Ochs' sax is equally raw, blusterous and fierce.

Yet somehow the overall sound is not violent, nor aggressive. Despite the power, you could even call it sensitive and deeply felt. All improvisations are truly collective creations, with equal roles for each instrument. And they listen well: each member can initiate changes that are being followed by the two others.

For their first album, released in 2009, I wrote that sparkles fly, and that's the case here too. Even within the very used concept of the sax-bass-drums trio, they manage to create their own voice, one of wild explorations and emotional expressivity, that grows organically from reinforcing and enriching each other's sounds. The result is quite varied with five tracks of distinct character and length. 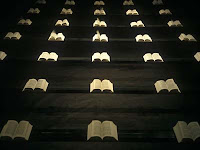 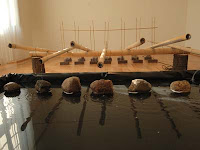 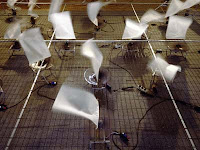