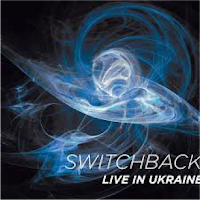 Switchback - the name says it all. On the one hand the word describes a serpentine path or several sweeping roads on a mountain slope, but it also refers to a rollercoaster. And indeed, this quartet‘s music offers emotional peaks and troughs, alternating dramas where the musical map leads to blues, gospels and folks songs, only to take an abrupt turn into free jazz, klezmer and elements of modern classical. Ecstatic, almost feverish outbreaks gradually flow into slow, quiet phases.

The reason for this lucky bag are the musicians. Switchback is a collision of two musical worlds, American and European. Mars Williams (saxes, toys) has been a long time member of the Chicago free jazz scene and Hilliard Greene is a New York based bassist who is deeply rooted in the jazz tradition. On the other hand there’s Waclaw Zimpel (clarinets, flutes, shrutibox), who contributes Polish folk music and a certain Eastern European spirituality, while German percussionist Klaus Kugel delivers a Zen-buddhist-like abstract groove.

The result is excellent music. The reeds work together well: Mars Williams is the expressive center of the band, his powerful solos focussing the listener’s attention, while Waclaw Zimpel with his singing and pure clarinet tone (particularly on the bass clarinet), creates sturdy arches to support Williams. More than that, the interaction of sax and clarinet shows a certain congeniality. Despite their different musical personalities, Williams and Zimpel find common ground allowing sharp dialogues with varied runs, where phrases and their counterparts are refined and shaded between them.

This takes place in front of an excellent rhythm section - and Hilliard Greene and Klaus Kugel are a match made in heaven. Kugel emits a fountain of percussive sprinkles and showers while Greene’s sometimes plucked, sometimes bowed sharp-edged double bass provides a grounding for his fellow musicians and keeps the ship on course.

A good example of how the band works is “There were Houses“, the opening number. It starts with an almost chaotic dialogue between Williams and Zimpel, which Greene and Kugel try to moderate with long glissandi and fervent drum rolls. Then the piece switches to a free jazz trio before Zimpel throws in a riff reminiscent of circus music. The second part is introduced by Greene’s melancholic arcos and Zimpel on shrutibox, a simple hand-operated instrument often used in Indian music, which provides a rich drone background. It‘s Greene who moves the introspective character of this passage into the public sphere by introducing the melody of the famous spiritual “Kumbaya“ on the bass, a song often associated with the Civil Rights Movement. This aspect is picked up again at the end of the album. “Plywie Kacza“, the last track, is the song the Ukrainian protesters sang on the Maidan Square, where they demonstrated against the Yanukovych government in 2013/14. It’s a sad, yet inspiring song whose melancholic main theme is torn apart by the band and re-connected in the end - a typical Switchback approach.

After a marvelous show at Weikersheim’s W71 Waclaw Zimpel told me what he loves in this
project is that whenever they meet they sound completely different, it’s always something new and unexpected. And indeed, compared to the first album, Live in Ukraine is more meditative and
elegiac. Hopefully, there will be a third album.

Live in Ukraine is available on CD. You can buy it from http://www.downtownmusicgallery.com.

Listen to “There were Houses“ here: