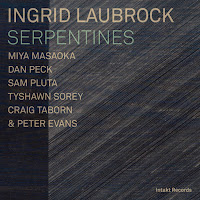 Another year, another upheaval in Ingrid Laubrock’s music. Laubrock has always assembled impressive bands, each—despite some overlapping membership—standing as distinct sonic entities. They’ve also served as blazes along an increasingly challenging trail of development as a composer and band leader, with each new group Laubrock convenes digesting and incorporating the lessons and strategies of those before. The septet behind Serpentines is the latest blaze, a mix of past collaborators and new faces that has affinities with Laubrock’s recent projects, but nevertheless bushwhacks into yet new territory.

Serpentines is a record of contrasts, shifting between spaciousness and density, concision and elaboration, restraint and virtuosity. These tensions are not the means to some cathartic resolution, but rather deliberate friction points that might spark novel musical ideas. Two unusual additions exemplify these contrasts well: Miya Masaoka’s koto, a delicate Japanese instrument with hundreds of years of history, and Sam Pluta’s electronics, which can feel as though they’re beamed in from some time in the future. Those familiar with Pluta’s ability to reshape Peter Evans’s entire quintet will find him to be relatively discreet here, excepting a bizarre, fourth wall-breaking solo spot in “Squirrels” that will make you think your audio system is fried.

As with last year’s Ubatuba, Laubrock’s compositions roam between controlled atmospherics and loose schemes designed to provoke her cast of improvisers into bouts of jaunty, knotted counterpoint. “Pothole Analytics Pt. 2” spins simple canonical motifs into a whorl of complexity by allowing each musician to choose their own tempo, while stretches of “Squirrels” and “Serpentines” are dizzying accretions of strange timbres and spirited interplay. Florian Keller rightly focuses on the significance of the album’s title in the liner notes: a writhing pile of snakes, Serpentines questions clean, linear approaches, favoring instead the unpredictable and the unexpected. In each of Serpentine’sfive pieces, no single moment betrays what will happen in the next.

At the other end of the spectrum, centerpiece “Chip in the Brain” has the ominous feel of a synth-heavy 80s horror soundtrack. Much like her octet’s music, the number of musicians involved is misleading: Taborn, Masaoka, Sorey, and Laubrock on glockenspiel form a tight-knit pattern, feeling more like one element than four. Beneath, Peck and Pluta merge into a snoring, gurgling drone, while Evans’s mournful trumpet drifts above it all. It’s unlike anything else on Serpentines, or that we’ve heard from Laubrock before.

Closing on a beautiful duet of piano and koto, Serpentines is a record that demands to be played again; it’s music that can be appreciated, but perhaps not fully understood after only one listen. It’s a fitting and absorbing continuation of Laubrock’s ongoing project: writing music that both excites and challenges some of the world’s best improvisers. Happily, we listeners can be excited and challenged by it, too.


And in concert at Roulette this month: