Some recent releases by and with Danish musicians that promise to introduce you a unique aspect of the famous cozy concept of hygge, and warm your surrounding in the coming winter. 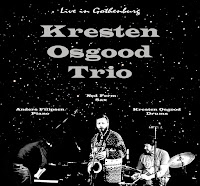 This trio brings together highly versatile, heavyweights musicians - drummer-leader Kresten Osgood, known from his collaborations with sax greats Sam Rivers, Yusef Lateef and John Tchicai and hero pianists Paul Bley and Masabumi Kikuchi; American, Copenhagen-based Ned Ferm, known from his work with sax player Maria Faust groups and vocalists Kira Skov and Marie Fisker, and pianist Anders Filipsen, who plays in the bands Travelling Tribes, The Black Nothing and The Firebirds. These prolific musicians were involved in countless projects that embraced modern jazz, world music, classic and contemporary music, country and funk, but as a trio they chose to improvise freely.

The debut album of the trio was recorded live at the Nefertiti club in Gothenburg, Sweden, three years after Osgood, Ferm and Filipsen began to play together. The six pieces are simply numbered without any titles, as all were improvised on the moment. Ferm leads the first piece, the 16 minutes of “4”, with a raw, ecstatic solo that set the tone for an explosive improvisation that sounds as a paying respect to the fiery legacy of American free jazz of the sixties, still, sounding totally fresh. Suddenly the trio changes gears to a contemplative mode before Osgood sets the engines on fire again. On the next, much shorter pieces, the trio explores similar moves, alternating between cathartic edges and the sparse moments. Still, on each improvisation these three musicians navigate differently, playing with commanding, irresistible power and passion. 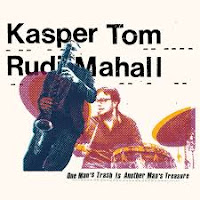 The witty and playful duets experiment with structures, shifting dynamics, timbral qualities of their instruments and fresh textures. Both Christiansen and Mahall sound as enjoying challenging themselves while attempting to explore new improvising strategies and uncharted sonic territories. Still, even in their most conflictual modes, as on “Totart” or the Dolphy-tinged “Die Flexitarier”, they improvise with an engaging sense of melody. Their immediate, profound understanding enable both to charge such intense improvisations as “Drummer Queen” and “An der dünnen grauen Odense Å” with fast-shifting moods - fiery and muscular, playful and polyrhythmic or minimalist and intimate. “Frühaufsteher” stresses the duo sonic searches even deeper. There Mahall's inventive multiphonics and overtones assimilates within Christiansen's exploration of the cymbals spectrum. 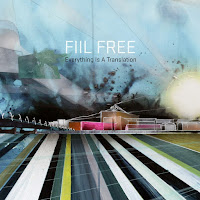 Pianist Lars Fiil's previous projects for a quartet (Reconsideration, Gateway, 2011) and for a trio (Frit Fald, Fill Free, 2015) suggested fragile intimacy. On his third solo album, Everything Is A Translation, he experiments with a more expansive course, employing a new septet that explores his original compositional ideas, delicate sonic searches and collective improvisations. In this septet Fill plays on a “crackling” piano, accompanied by vibes player Martin Fabricius, Swedish guitarist Henrik Olsson (leader of the Penumbra Ensemble), double bass player Casper Nyvang Rask and drummer Bjørn Heebøll - focusing on “soft bow strokes” on their respective instruments - and Polish, Copenhagen-based trumpeter Tomasz Dąbrowski and sax and clarinet player Henrik Pultz Melbye (from the free-jazz-noise Svin), both add “streams of air that whirls in and out of bended brass and clarinet”.

The new, experimental course emphasize Fill unique language as a composer and improviser, but at the same colors his new compositions in less substantial lights and shades than the ones featured on his previous albums. The minimalist, lyrical textures - highlighting the caressing vibes of Fabricius, with the delicate, almost silent searches for ethereal tonalities, light grooves, disciplined interplay and fragile, collective improvisations do not add up to convincing, moving compositions. Only when the septet fleshes its interplay with a tough, Monk-ish rhythmic motive, as on “Progress In The Name Of”, and later on in the slow-cooking version of the final ,title-composition, the music finally takes off and employs the full potential of the the seven musicians original voices. 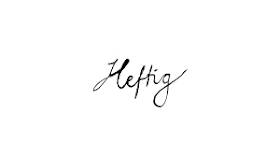 The Hum is Copenhagen-based quartet that changes the rules of the game. No need to market its music with nostalgic artifacts as limited-editions of vinyls or cassettes; in fact there are no physical object at all and no downloads. Just an accessible to all, audio-visual experience on the quartet website: www.TheHumTheSong.net. Olsson and Pultz Melbye return with electric bass player Nicolai Kaas Claesson and drummer Rune Lohse. Swedish visual artist Tina prepared the suggestive animations and videos and Anders Skouboe programmed all.

The five short, improvised songs are meant to be experienced as “short stories about the undefinable loneliness of traveling into the unknown”. These songs correspond beautifully with the suggestive images and videos of barren, lonely scenery created by Damgaard and vice versa. The Hum music may sound simple, even innocent, on first listening - layers of repetitive, rhythmic riffs spiced with delicate noises that slowly gravitate into an infectious soundscapes. But actually this kind of repetition prepares you best for the sensual, meditative situation of being drawn into this mysterious audio-visual experience, wishing it lasted much longer than 14 minutes. 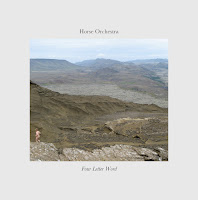 “Barok, Sydeuropæisk Begravelsesmusik, Traditioneljazz og Fri Improvisation” (in Danish: Baroque Music, Southern-European Funeral Music, Traditional Jazz and Free Improvisation in Danish), one of Horse Orchestra new pieces on its sophomore album, sums best this Copenhagen-based, Nordic Septet spirit. You can also throw hip-hop and a bit of noise to the recipe, close your eyes and imagine Benny Goodman dances a martian waltz with Sun Ra, while Charles Mingus and Merzbow cooking together the rhythm.

Four Letter Word was recorded live on June 2016 in Copenhagen. Zeeberg's compositions irreverently mixing eclectic elements from different genres and styles, cleverly arranged for the Orchestra. His sharp sense of humor and the musicians passionate playing and impressive improvising skills save all from sliding into total chaos. The only cover, a soulful version of James Last theme from the film “Morgens um sieben ist die Welt noch In Ordnung” (1968) proves that that sometimes you can find treasures in the work of this corny composer. More important, Horse Orchestra is an excellent live band. My only complaint is about its length, only 36 minutes, too short for a decent party. 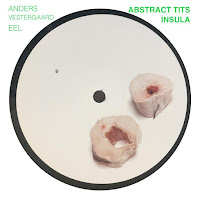 Eel anatomy, as reflected in the implicit cover artwork, may parallel the anatomy of the music, being skeletal yet intricate in structure. This title of drummer Anders Vestergaard's debut solo album also refers to his unique set-up - part electric, part non-electric - as and this album atmosphere, intriguing and grotesque, playful and eerie.

Vestergaard is known as the drummer of free-noise-improv trio Yes Deer, founder of the Abstract Tits label and half of the Laser Nun duo with guitarist Lars Bech Pilgaard. This limited-edition, 12’’ Vinyl - only 200 copies and no download (a CD-R version is distributed by the Japanese OOO SOUND label, featuring a bonus re-interpretation by modular synthesizer player Naoki Nomoto) - documents four pieces executed on a self-made set-up of acoustic percussion instruments connected with electronic feedback-chains. This set-up forces Vestergaard to adapt itself to its unpredictable nature, adding a repetitive, industrial sense to the improvised drumming, as a kind of twisted-distorted perspective of electronic dance music. The opening piece “ojo” captures best the dynamic spectrum of Vestergaard's unique set-up. He disciplines white noises, electronic blips, fractured acoustic rhythmic patterns with alien sounding rustle and buzzes into a disturbing but totally arresting aural experience.