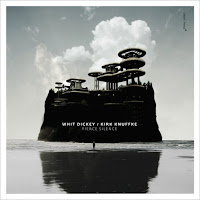 It wasn’t until I saw him live at the Lilypad in Cambridge, MA earlier this fall that I began to fully appreciate what Kirk Knuffke and his cornet bring to the scene. In that space, free of distractions, Knuffke’s playing revealed itself in all its earnest lyricism, eschewing shows of bravura for a reserved deliberateness that—like the work of Morton Feldman, or the friendship of a shy person—asks you to lean in a little closer before showing you why you won’t want to pull away.

True, there may be other aspects to Knuffke’s playing, but it’s this understated sensibility that the cornetist brings to Fierce Silence. Beyond drummer Whit Dickey, the invisible third member of this duo is—you guessed it—the negative space they invite into their improvisations. Yet the silences never feel staged, or used merely to heighten the playing when it resumes, because they’re integrated into Knuffke and Dickey’s overarching sensibility. Across ten pieces totaling just 45 minutes, for his part Knuffke favors sustained husky notes and miniature squeaks, rasping muted tones that shimmer in their metallic vibrations. His on-again, off-again melodies are like sweet hard candy rolled around the mouth, always dissolving. A perfect complement in this situation, Dickey can drum on the one hand with the freestanding melodicism of Max Roach or on the other with a net-like looseness, stirring up subtly swinging grooves that support without subordinating.

If you liked Row for William O., Knuffke’s duo album with Michael Bisio, you’ll want to hear Fierce Silence. All we can hope for next is a Knuffke/Bisio/Dickey trio…

Thanks for this duo series, really enjoying it.

Another excellent Knuffke duo is The Extemrinating Angel with Mike Pride.