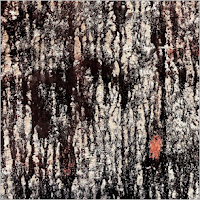 Following on the heels of this summer's “Live at The Spot +1” cassette release on the Astral Spirits label, Both Will Escape both refines and expands on the duo's promise and power.  Separately, Tashi Dorji (guitar) and Tyler Damon (percussion) are forces of nature.  Together, the combination of Dorji's high-end metallic  power-tool skree and Damon's manic-but-earthy hippie clomping are a perfect pairing.  Each has a musical spoon in the other guy's soup to begin with, resulting in a collaboration that seems almost brotherly.  Different interests and approaches, same dynamic makeup.

Opening with a percussion invocation, Damon plays a melodic groove on metal bowls and drums onto which Dorji's delay-drenched treble plucking easily hops.  A deity appears in the form of a loop of pulsating noise, which sends Dorji off to build a wall of sonic plaster & casts Damon in a total blur of freedom.   (I swear the first 8 minutes pass in about a minute and a half.)  Damon experiments on the last few minutes of the track with chains and silverware and metal bowls and car keys and Allen wrenches while Dorji gradually winds down the metal drilling.  I have no idea how these guys manage to make this clanging metallic shrapnel sound warm and inviting, but they certainly make it so.  Must be some magic brother shit.

On “Two Rabbits” Dorji shoots off a monstrous two-note attack Glenn Branca would be proud of, then launches into a full-scale onslaught as one-man-army Damon unleashes his complete arsenal.  Everyone is dead by the 3.5 minute mark.  So much for warm and inviting.  The subsequent dirge begins with a behind-the-bridge, early-Sonic-Youth loop to which Damon adds a wash of cymbals.  Dorji improvises some pretty-ish chords over it, slowly building another wall as Damon attempts to cover every piece of his drum kit simultaneously.

Take Leah-era Magik Markers & add Adris Hoyos and you have the jumping-off point for the first half of the glorious stare-into-the-sun beauty of “Gate Left Open,” which begins the B side.  Halfway through Dorji takes a solo skronk fest, all bedpans and ice picks.  Bad Moon Rising loops enter along with deceptively light grooving from Damon.  Again, Dorji adds chords and Damon picks up the pace until the piece concludes with a sudden and perfect crash.  Then straight into the spindly and prickly “Kudzu Weave,” Damon joins Dorji's cut-up loop by putting emphasis on various aspects of the groove with playful brushwork.  An inspired turnaround happens via some backwards looping from Dorji while beautiful waves of percussion roll into shore, moving the music into territory usually associated with Matthew Bower or Marcia Bassett.  Absolutely stunning.

Dorji is clearly the leader on this session; but earlier this year I saw Damon play with Manas (Dorji's duo with drummer Thom Nguyen) at The Spot and Damon steered the ship for most of the set – and the result of this dynamic  shift was every bit as exciting as the music on Both Will Escape.  I'd say expect great things, but they're already happening.  Magic brother shit has arrived.