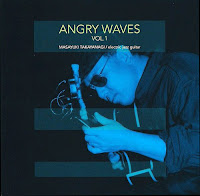 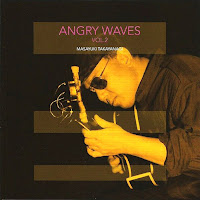 Released earlier in the year these two archived documents were recorded live in 1984 showing the rarely recorded guitar trio of Takayanagi (Electric Guitar), Nobuyoshi Ino (Bass) and Hiroshi Yamazaki (Drums).  It’s the same line-up that released the classic 850113 album (the date on which it was recorded), which is my personal Takayanagi favourite.  Unlike the live recordings on 850113 the ones on Angry Waves Vol.1 & 2 were not originally released and stayed in Takayanagi’s private collection until recently.  These live materials have now been mastered from the original cassette tapes, and if that doesn’t sound too promising, then think again because they sound much better than one might expect.

To have two new discs of this great trio is of real historical importance for all Takayanagi fans as this line-up had only previously released the one album, which was a great shame.  Within the guitarists canon this group falls in between the earlier work of his New Direction Unit and the tabletop and electronics solo guitar of Action Direct.  Whereas the focus of both of those could be seen as using noise based materials to create differing musics, the Angry Waves trio functions more traditionally with regard to instrumental roles using a free-jazz vocabulary.  In particular, Takayanagi’s conception for this group was the music of Albert Ayler, to be specific, and both the Angry Waves discs contain titles that nod to the debt that the guitarist obviously felt for the great saxophonist/composer.
Most tracks share the title of an Ayler piece, but with the pre-fix ‘Fab’ inserted in front such as “Fab Prophet”, which opens Vol.1 or “Fab Spirits”.  The trio very much operates in the ‘spirit of Ayler’ as opposed to covering his tunes with the tracks often baring little resemblance to their namesakes, except for the likes of “Fab Wizard” on Vol.2, which clearly contains the opening melody of the original before Takayanagi takes it off in his own direction.

These extended improvisations are complex in nature and are somewhat a stream of consciousness, with Takayanagi’s guitar being the regular constant with it’s unbroken flow of lines and perpetual movement driving and controlling the shape of the music throughout.  There’s an industriousness to the music, which is propelled further by the clattering and splattering drumming of Yamazaki, whilst Ino holds it altogether, being the perfect foil for Takayanagi’s playing.  There is also a gloriousness to the freedom of the playing contained on these two volumes without the guitarist taking it so far out that it comes at the expense of the rhythm, flowing lines or more traditional sounds as Takayanagi does on many other recordings.  This in itself has been recognized by the guitarist and it’s no wonder that his contribution is credited as “electric jazz guitar” (as is also the case on the earlier release of 850113), which also distinguishes it from his ‘cooler’ recordings labelled with his nickname “Jojo”.

If I haven’t managed to make it clear yet, then I must point out that this is probably one of the most important releases of the year, not only for the historical aspect but also for the music contained within.  There is much to digest on these two volumes, and although they are being sold separately, artistically they form a single statement and another chance to hear Takayanagi’s Angry Waves trio in full flight.
Paul on Tuesday, December 27, 2016
Share