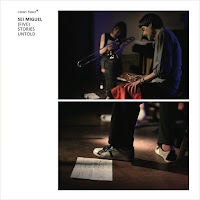 An elusive musician if ever there was one, trumpet player Sei Miguel has been active since the Eighties, but until recently he was virtually unknown outside the borders of Portugal. In the last few years the Clean Feed label has released a series of albums that allowed Miguel’s idiosyncratic take on creative music to be finally heard and appreciated by a broader audience interested in free improvisation, avant-garde composition and electroacoustic experiments.

(Five) Stories Untold might be the perfect introduction to Miguel’s music, as it collects five pieces characterized by instrumental combinations and creative approaches that effectively illustrate his peculiar aesthetic vision, blurring the line between composition and improvisation in always unexpected ways. The first piece, "Asterion", is a duet with trombonist Fala Mariam, and exemplifies the musicians’ distinctive styles and the tight interplay they are capable of: the bittersweet tone of Miguel’s pocket trumpet, denoting an exuberant melodic instinct and a penchant for deconstructing timbre and phrasing, is complemented by the austere, full-bodied sound of Mariam’s trombone, between textural abstractions and clearly defined tonal excursions. The following "Abrigo Dos Pássaros" adds Moz Carrapa on acoustic guitar to the mix, who provides a sparse melodic frame in which Miguel and Mariam move freely, the trio indulging in a transparent, lyrical dialogue of stark beauty. "Os Céus" and "Oito Lançamentos para Pedro Caveira" return to the core duo of trumpet and trombone, adding Carlos Santos on computer and the rhythm section of Hernâni Faustino on electric bass and Luìs Desirat on drums. Here the atmosphere is slightly different: there are echoes of intelligible structures, with a more clearly defined rhythmic dimension and the familiar development of reiterated thematic motifs and solo interludes – yet everything is more implied than actually stated, giving the performances a captivating, dream-like quality. The last track on the album, “Sentinela", continues in this vein, enriching the sound palette with a second bass (Lourenço) and a woodwinds and flute section (Torres, Amado, Parrinha, Curado). The rhythm here is distinctly delineated, the whole piece built on the backbone of a double walking bass that, combined with sweeping brass and woodwinds ensemble passages, gives the proceedings an intriguing cinematic character – and yet the music remains somehow unresolved, suspended between free abstract expression and structural concreteness, balancing sound and silence with carefully pondered minimal moves.

(Five) Stories Untold confirms once again the uniqueness of Sei Miguel’s music: the building blocks of his compositions and improvisations are not necessarily new, but the final result is always something of a mystery, inhabiting an eccentric sound world that sounds familiar yet completely alien, a musical dimension that is unmistakably his own.
Paul on Monday, December 26, 2016
Share