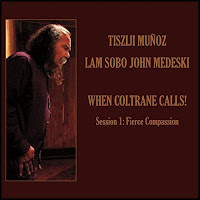 “…it is, here and now, taught that music is ordinarily used to create, validate and express self-limitation and bondage, but it can also be used for psycho-physical transformation and self-liberation. Whether or not the music is or can be used for higher purposes depends upon its medium or channel and the perceptional understanding or spiritual unfoldment of the individual performer or listener.” (Tisziji Munoz – The Bhagavad Guitar Player)

Coltrane’s music was the catalyst that initially sparked Tisziji Munoz’s interest in creative music and it seems after many years, spiritual journeys and many albums later that Munoz has come full circle to where it all started for him.  This album contains four different Coltrane tunes, “Wise One”, “Alabama”, “Lonnie’s Lament” & two versions of “Ogunde”, with the rest of the album being originals of Munoz’s.  Clearly, this album was never meant to be a ‘testimonial’ trudging through some Coltrane tunes, or a stale academic exercise in authenticity.  The emphasis appears to be on the creative spirit of the jazz master and the essence of the session.  This is borne out by the way the pieces are approached and the inclusion of original tunes/improvisations that try to capture the life-force of the music, which is the order of the day.

The group consists of a variety of musicians including Munoz (Electric Guitar), John Medeski (Piano), Don Pate (Acoustic Bass), John Benitez (Basses & Percussion), George Koller (Acoustic Bass), Tony Falco (Drums), Bob Moses (Drums) and Adam Benham (Percussion) all appearing under their spiritual name guises (for those that have them).  First off, the album seems to capture some of the spirit of Munoz’s classic albums such as Breaking the Wheel of Life and Death! & Auspicious Healing! and not just for the consistent use of the exclamation mark in the titles!  In some part this appears to come from John Medeski’s input (his name also being singled out on the album cover with equal weighting), which tends to provide the same harmonious contrast to Munoz’s playing as the brilliant exuberance of Marilyn Crispell’s piano on the aforementioned records.

“Wise One” is the first track to air with Munoz’s blistering lead guitar tracing the outline shape of the melody before spiraling off into more distant realms whilst Medeski’s piano follows the original changes more faithfully which then rolls into a piano and bass arrangement of “Alabama”.  Both versions of “Ogunde” provide Tisziji Munoz with the perfect platform to get ‘out there’, with his playing providing similar improvised arabesques and free-form sensitivity that Coltrane’s versions captured.  Of the Munoz originals “Living Native Wisdom” and “Fearless in Death” accommodate a more extended (both coming in at around 14 and 12 minutes respectively) and explorative structure allowing the music to change and contrast the initial material more naturally, either opening up into an oasis of calm as in the former or to gradually twist and turn with it’s complex and tangled lines as in the latter.

For the Coltrane purists I’m sure many noses will be turned up at this endeavor, but for those of us who are open minded and keen to engage with good creative music-making I’m sure many others will find this an interesting listen.  For those wanting more When Coltrane Calls! Session 3: Living Immortality is also out for release.
Paul on Sunday, December 11, 2016
Share