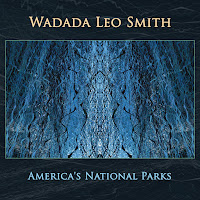 The album starts with "New Orleans, the National Culture Park": a repetitive bass line, a romantic cello and spiritual trumpet, a wayward piano, and a wonderfully accentuating drums suck you into Wadada Leo Smith's musical universe. The pulse that you feel sets the tone for further beautiful improvisations of muted trumpet and cello, full of drama and passion, yet then the music develops into a central section of eery piano, solo bass, creating a weird sense of calm and uncertainty of how the music will evolve, till the cello and the piano find a common voice, briefly only and the piano disappears again and bass and cello engage in a fierce rhythmless battle, followed by the drums coming to the forefront for an intimate conversation with the cello. The piano gives some five little notes, then slowly an impressionistic theme emerges again, fragile and sensitive, moving back to the bass vamp from the beginning and the whole piece is a wonderful continuous shifting of layers of sounds, like a panoramic camera movement over a constantly changing landscape. A wonderful opener for this magnificent album.

Wadada Leo Smith's Golden Quartet/Quintet is a monument of contemporary music. With their first installment on Tzadik in 2000, then with Anthony Davis on piano, Malachi Favors on bass and Jack DeJohnette on drums, the tone was already set: unhuried music that starts from composed pieces that could as easily come from contemporary classical music as from jazz with room for arranged improvisations performed by stellar musicians. "The Year of the Elephant" was released in 2002 with the same band, followed by "Tabligh" in 2008, now with Vijay Iyer on piano, John Lindberg on bass, and Shannon Jackson on drums.

Since then, Wadada Leo Smith started creating his own kind of music, integrating new concepts of collective improvisation while at the same time creating a language that does away with preconceived concepts of how music should sound or be arranged, complex, demanding close listening, yet at the same time welcoming - I guess - even to people less familiar with modern and free music. He further refined his concept of "Ahkreanvention", his notation system which "literally means to create and invent musical ideas simultaneously, utilizing the fundamental laws of improvisation and composition. Within this system, all of the elements of the scored music are controlled through symbols designating duration, improvisation, and moving sounds of different velocities". More recent albums that illustrate this are "The Great Lakes Suite",  "Occupy The World", and "Ten Freedom Summers". There are no limits anymore. Whether quartets or orchestral, the sound is grand and epic, the topic is political, the delivery is spiritual, the tone humanistic, the feelings are rooted in deep soil, and the compositions are visionary.

On "America's National Parks", the Golden Quartet moves into the direction of this new approach, and it is actually expanded into a quintet with the addition of Ashley Walters on cello. Smith plays trumpet of course, Anthony Davis is on piano, John Lindberg on bass and Pheeroan akLaff on drums.

The "National Parks" that Smith takes as his topic for this album, are not all existing or official national parks. He promotes New Orleans to the level of National Culture Park, because of its musical heritage and influence. He creates the concept of a "Literary National Park", when referring to the author and musicologist Eileen Jackson Southern, who founded the journal "The Black Perspective In Music". He also brings the entire Mississippi river to the level of a national park too, because it is “a memorial site which was used as a dumping place for black bodies by hostile forces in Mississippi. I use the word ‘dark’ to show that these things are buried or hidden, but the body itself doesn’t stay hidden; it floats up", as he describes it in the liner notes.

The other tracks refer to actual National Parks: Yellowstone, Yosemite, Sequoia & Kings Canyon. His music is as much political as it is spiritual. He writes "My feeling is that the parks should be independent of Congress and organized around an independent source who has no political need to be reelected. So it’s a spiritual/psychological investigation mixed with the political dynamics.”

As said, the music continues in the same vein as his epic pieces of recent years. Apart from the instruments used, it is difficult to call it jazz. With composed anchor points in the lenghty pieces, the quintet gives us floating, sweeping aural images of wide landscapes that keep changing in front of our ears, as if in one long slow motion panoramic camera movement over a far away horizon. Sometimes that horizon is flat, with lots of empty space and low density instrumentation, stretched notes and absent rhythms, sometimes the horizon gets jagged, with energetic interactions, bursts of sounds and mid-tempo rhythms like a river rolling forward unrelentlessly, sometimes dissonance brings us suprises like birds flying out of a bush, but more often than not, and like in a suite, all these sonic images move forward, one after the other in the same piece, never repeating themselves, always moving forward in a steady flow, like life itself.
The second piece, "Eileen Jackson" is slow, meditative, with incredibly stretched notes on the trumpet, with one lasting even twenty seconds, muted, with lots of empty space. Piano and bass add a dark and dissonant foundation for the sad and soaring trumpet. The cello then joins. Little drum rolls emphasise the slowness. Power and sensitivity find a common voice. Then the meditative nature of the piece shifts into more irregular playing, with short bursts, with stop-and-go moments, and bass piano and drums give a very jazzy and light-footed almost sketchy interaction, driven by the bass, and when silence almost naturally appears, so do the long and sinuous tones of trumpet and cello, moving us back to the beginning of the composition.

The theme of "Yellowstone" is built around a sequence of ascending notes, with again a wonderful bass line for Lindberg that gives the foundation for the whole piece, in which Davis delivers a great post-boppish piano moment, light as the air and flowing like water, with some cello strokes to add colored shadings, followed by a slow middle part with precise and beautiful solo bass, and then the trumpet brings clarion like tones, powerful, reverent, driving the band and the theme back on track for a glorious finale.

The main track is "Mississippi River", which lasts more than half an hour, and it takes the listener to the darkness of its history and the beauty of its nature, a conflict of expression that can be felt in the composition and improvisations, with quiet moments built around silence shifting into moments of agitated dissonance, of glorious trumpet and crazy piano chords, with an unmistakeable flow taking us along for new surprises and vistas in each bend of the river.

You get the gist. Wadada Leo Smith and his Golden Quintet continue on their ambitious path to bring us new music that is both innovative and accessible. It is as grand and epic as his large ensembles of the past year, but because of the quintet's more human or intimate setting, the feelings, the vision and the individual quality of the musicians make the result even stronger. Regardless of the excellent work of the past few years, I have the impression that the best of both the Golden Quartet and the "classical" works converge in this phenomenal album. Wadada Leo Smith brings modern music to a completely new level.

Not to be missed.