On January 14, 2007 I wrote the first review for this blog, not knowing whether there was anybody out there who might be interested. Probably I did not even care about it either. The story of how I started was that my sons challenged me. They were in their teens then, indeed the right age to challenge dad a little. They said I was a digital illiterate and they said nobody else liked the music I liked. In their view that was inconceivable! I wanted to prove them wrong. So, thanks guys for the challenge.

So I kept writing furiously. Thanks to a very long commute to work, I was able to listen, and every night I wrote a new review, or almost. I was then a member of the largest music library in the world, organised by the French-speaking community in Belgium. You can check here, and type any name in the search bar at the top under the "noms" (name) section, and you can understand what a treasure was right there at my fingertips. I guess they have more than 200,000 jazz albums, even the most obscure or difficult to find albums, both old and new. Borrowing on average 10 CDs a week, I listened like a madman, and I wrote like a madman. Every day. Not hindered by too much knowledge, but in a very passionate way. And somehow people started reacting: I was not alone on the world listening to this kind of music! Readers commented positively. Some musicians started sending material. Some labels starting sending music. To be more concrete: the first CD I received was from Satoko Fujii, all the way from Japan. I couldn't believe my luck. The first label that sent me promo materials was Clean Feed. I was in heaven.

On January 2, 2011, we announced that our team was expanded by other fans of free jazz : Paul Acquaro joined, together with Joe Higham, Guy Peters, Stanley Zappa, Tony Medici, Bryan McAllister, Ananth Krishnan. That was an amazing moment. Each came with their own writing style, and their own music preferences. And they knew more about it than I did. Quite some improvement!

In the meantime, we have had offers to merge with other music blogs. We had to fight other blogs who just copied our reviews. We tried to set up agreements for translations in other regions, but that never worked out. We had commercial proposals. We received advertisting proposals. Somehow we always refused any financial interest and links. Just some guys being passionate about their music, was already fun enough.

Then new people joined over the years (in random order): Martin Schray, Troy Dostert, Dan Sorrells, Colin Green, Derek Stone, Eric McDowell, Lee Rice Epstein, Tom Burris, Chris Haines, Antonio Poscic, Nicola Negri, Eyal Haruveni, Stefan Wood, David Menestres, Fotis Nikolakopoulos, Julian Eidenberger, Peter Gough,  Paolo Casertano, Matthew Grigg, Hugo Truyens, Joe Barela, Josh Campbell, Monique Avakian, Filip Bukrshliev, Philip Coombs, Brian Questa, Alfonso Lex, Ed Pettersen, Steve Mossberg, JA Besche, Gregory McGreevy, Sam, Joris De Roy. They all come from the US and Europe, with different interests and views. Some dropped off after some reviews for a variety of understandable reasons. Some kept writing and contributing. I want to thank them all, because they have made this blog what it is today. They are the "Collective". I wish we had more diversity in our team - we're all forty or fifty year old white males - luckily with open minds and ears, but still ... some diversity is more than welcome!

Then came a time when it all became too much for me, and Paul Acquaro agreed to take over the day-to-day management of the blog. He has done this now for four years, and our impact and influence has only increased thanks to him.

Over the past ten years, we posted approximately 3500 articles, possibly reviewing some 4,000 albums, of which almost 350 received a five-star rating. We tried to keep it simple and easy to navigate. Readership increased over the years, from  64,000 views in the whole of 2007 reaching 163,000 views in December 2016. Quite a change. Thank you readers, for your ongoing support and interest.

We've seen the arrival of Bandcamp, Soundcloud and other digital ways of publishing music without requiring a label, which offered new possibilities for musicians to share their music in a direct way.

I also want to thank our structural partners InstantJazz and Downtown Music Gallery for their support and collaboration.

And what about the music? How did that change in the last ten years? Well, it's a little difficult to enumerate all the musicians who really made a difference in the last decade. There are probably too many of them. What we can say, is that free jazz, avant-garde and improvised music is thriving. At least when you just assess the musical output, the number of albums we receive every year, the concerts that take place around the world (but mostly in Europe and the US), the new names of young artists who delighted us with new sounds and musical experiences, while many of the established names kept going strong. And as we would expect, boundaries and forms are being destroyed along the way, and as can be expected of the musical vanguard, influences are picked up left and right, minimalism, electronics, classical, sonic explorations.

I tried to capture some trends in music in the quadrant below. This is maybe a futile exercise because the criteria are subjective, and the music shifts all too easily from one category to the other. But it helps to identify what else you might like if you know some of the bands. And it's another way of presenting the musicians that come to mind while writing now. 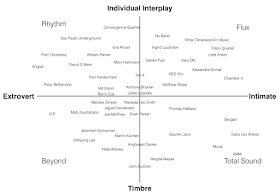 One evolution - bottom right - went into more intimate, personal and precise music, where every sound is carefully crafted and nurtured (AMM, Dans Les Arbres, Mural, Skogen, ). The music is intimate, calm, built around silence and a collective exploration of timbre. Even if acoustic, the overall sound is not about the voices of the different instruments, but rather on the collective, total sound. It is at times even hard to assess which instrument produces which sound.

On the other side - top left - we witness the continuation or even the revival of the joyous and infectious music of larger bands, that blow the listener away or carry her or him into a world of exuberance and festive feelings of community (Bill Dixon, Angles, Fire! Orchestra, Ken Vandermark, William Parker, Resonance Ensemble, ...). Rhythm plays a role and the jazz heritage is obvious.

In the top right quadrant, we get improvised music where "flux" and intimacy is more important than rhythm. The music is all improvised, without any arrangements and the band dynamics and collective coloring of mood and sphere are essential. Bands that come to mind in that space are Other Dimensions In Music, The Nu Band, RED Trio, Lotte Anker.

In the bottom left quadrant, we find sonic innovators, who are digging and digging into sounds, not looking for gold nuggets, but for some as yet unknown sonic quality, acoustic or electronic, that is both surprising as it is moving, mostly by individual artists (Okkyung Lee, John Butcher, Magda Mayas, Nate Wooley, Angharad Davies, Jeremiah Cymerman).

And then you have the musicians who try to integrate everything into something totally new (Wadada Leo Smith, Bill Dixon, Rob Mazurek, Satoko Fujii, ROVA Orchestra, Anthony Braxton).

Anyway, I don't want to pigeonhole music. But I want to thank all the musicians and the bands for all the great listening experiences that we have had in the past decade. In fifty years from now, people will look at your music like they look today at abstract paintings: full of enthusiasm, admiration and respect. It takes time before new musical vision gets appreciated. We hope to be able to contribute to this. I hope we also made a difference for them.

Congratulations on 10 years, Stef. It's been amazing and gratifying to watch the site grow. Thanks to everyone for their hard work.

Congrats on a great 10 years. This is the first blog I visit daily to find more wonderful music that floats my boat. At least half of my jazz collection was purchased due to the great reviews here.
Look forward to another 10 years.

10 years already… congratulations and thank you Stef and all ! I think I discovered this site about 9 years ago, learned and discovered lots of great and beautiful music.

PS - my teenage kids don’t think much of the music I listen too.

One of the sites I keep coming back to. Wonderful source. Wonderful reviews, I appreciate all the efforts each of you is putting in the (certainly sometimes more difficult, sometimes more easy) translation of music into words. Thanks.

woohoo! congrats! it's your 10 years, and my daughter's 4 months - ceeleebraatioon!

congrats & thanks for all

The real point of the quadrant is that if you join up the names with a pen, you get a picture of Stef!

I bought almost all Free Jazz Collective recommended 5 and 4.5 stars albums. Of course, as it seems to me (25 years I’m in this kind of music), many of them don’t deserve such appreciation; maximum – 4 stars and some would have enough – 3.5. But this is normal and very natural. This is your cultural experience, your subjective taste, your expectations from music. (Smile).
The truth is that the FJC is an excellent, very qualified team of reviewers. You do very important work. Personally for me FJC the only musical guide who can be trusted and which opinion should be necessary considered (in the ‘90s and 2000s it was Penguin Guide to Jazz). I have neither time, nor energy to seek out all interesting recordings. But I have a passion for music, even dependence on it. Therefore I’m very grateful for your work. Many thanks Free Jazz Collective! Good luck in 2017!

Thank you Stef for all your hard work, especially in the early years.
It was your efforts and writing that established the bona fides of this blog and made it the credible resource that this music required. Without those efforts the expansion to a collective may never have happened or succeeded in the way it has.
I can think of no other online, or offline, resource that provides such a valuable insight into creative music making of today.
So let's hear it for Stef's sons!

Congratulations! Really appreciate the site and the reviewers. Great exposure to new music with passionate and articulate words. Keep it up. We are out here!

congratulations to Stef and to the whole collective!
I follow this blog for about 7 years, every morning I read your reviews in search of new listening experiences.
I'd like to give my contribution... but I don't write well in English!
Gennaro, from Italy

Here's to another Ten years!🎂🤗

terrific diagram...as I look at it I realize I'm a kind of centrist

Wow! Happy anniversary! I discovered your blog about one year ago and I got hooked immediately.
Always interesting reviews, a very good starting point for thirsty ears.
Keep on keeping on!!!
Armando (from Milan)

Congratulations! I am still relatively new to jazz/improvised music/creative music/whatever; I discovered your blog 4-5 years ago when I started getting into this kind of music. Your blog has become an invaluable resource for discovering, understanding and appreciating new music.

Thank you to all the contributors.

Congratulations to all reviewers who make this great blog together!

Congrats you guys! Here's to another 10 years!