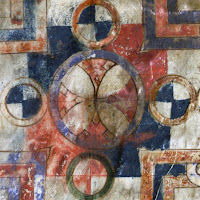 What to expect when Aram Bajakian puts out a new album? While fans of the shape-shifting guitarist should know better than to be surprised, little of Bajakian’s work—whether with his groups Kef and Abraxas or on recent albums like there were flowers also in hell, music inspired by the color of pomegranates, or Dálava—predicts the direction he takes on Dolphy Formations, self-released late last year. In place of the rhythmically energetic virtuosic playing I often associate with Bajakian’s playing (not to mention Eric Dolphy’s), on his latest album he presents an hour-long meditation built of overlapping long tones, rich textures, and patiently sustained sonic tension.  Low on pyrotechnics, high on nuance, Dolphy Formations is one of those magic albums that warp the listener’s sense of scale, turning details as tiny as a single plucked guitar string into surprising, centering events.

It’s hard to discuss Dolphy Formations without invoking themes of meditation. Indeed there’s an element of ritual or ceremony to the album. For me it starts with the process of clearing some time, finding a place to sit still, and setting up my headphones—all this necessary, I think, to appreciate the subtlety to the music. The regularity and duration of the three Variations, with each coming to rest between 19 and 20 minutes, suggests a calm, measured exercise of attention. The improvisations themselves are based on Dolphy’s “synthetic” scales, passed from their originator to Yusef Lateef to Bajakian in a lineage of masters.

If meditation extends into the actual listening experience—I won’t try to speak for all listeners—it may be in the way the playing leads the ear without really taking it anywhere. Despite its three-part structure, this isn’t music of beginnings, middles, and endings, but a perpetual present continually refreshed. In achieving this remarkable effect, Bajakian is aided by cellist Peggy Lee and trumpet player JP Carter (together forming the Handmade Blade trio). Unlike more stereotypically monolithic drone music, here each instrument slides into prominence in relatively short cycles, creating gently sinuous patterns of rise and fall. While timbral intensity and tonal complexity make for moments of great tension, terms like climax and resolution don’t apply. Each new color, texture, or micro-event in the slowly unfolding process is just enough to occupy the attention without keeping it from letting go. None of this is to say that Dolphy Formations can’t bear a whole other, purely musical perspective of appreciation. Bajakian is a dedicated educator, and however you like to look at it, his music has plenty to teach.