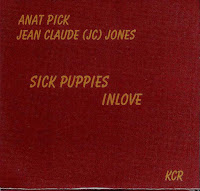 Anat Pick is one of the most experienced vocal artists working in the small and familiar Israeli scene of free music. She has developed a poetic aesthetic, mixing phonetics from imagined Oriental and Western languages, dadaist syntax and colorful sounds. She has collaborated before many times with Jean Claude Jones, when his MS disease still allowed him to play the double bass, but Sick Puppies Inlove, is the first document of their work.

Pick connected immediately with Jones and liberated him from any need to attach his instincts as an improviser to any instrument. The two recorded seven free-improvisations in Jones' living room using whatever was at hand, mundane objects, their voices and even sudden coughs, a Spanish guitar that was used to generate weird sounds and Jones' computer to process some of the live sounds. These improvisations sound urgent and fresh, flowing with joyful, anarchist inventions. Pick and Jones tempt each other with strange, colorful stories, articulated in a secretive lingo full of ridiculous pathos. These improvisations stress their rare, telepathic affinity. Both sound happy as innocent, playful puppies. 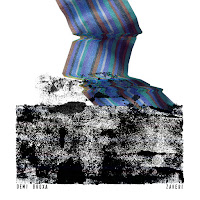 Demi Broxa is the experimental duo of Oslo-based Agnes Hvizdalek, the newest member of the experimental Norwegian group Nakama, and fellow-Austrian bass and electronics player Jakob Schneidewind, member of the avant-techno trio Elektro-Guzzi. Hvizdalek brings to this duo her “abstract vocal music”, an idiosyncratic delivery of minimalist and quiet, alien-sounding percussive utterances, later developed by the subtle electric bass pulses of Schneidewind and enhanced by his clever usage of assorted effects, extended techniques and preparations.

Zakeri, the duo's debut album, suggests different strategies of merging Hvizdalek's delicate vocal art with Schneidewind's multi-layered, detailed rhythmic patterns in a manner that transcends both sonic norms. On “Fetida,” Schneidewind mirrors and resonates Hvizdalek's vocals in the recording space; “Brikka” melts their aesthetics, encrypted and distorted as sonic transmissions from faraway, extraterrestrial origin; “Habit” offers an hypnotic-minimalist outline for a dance act, while “Konstrukt” cements this vein in a skeletal, abstract, techno-dance pattern; The title-piece and “Clinch” flirts with sounds that imitate talkative birds and “Gyng” sketches an atmospheric, cinematic soundscape. These improvised pieces often sound as imagined in a very vivid daydream. 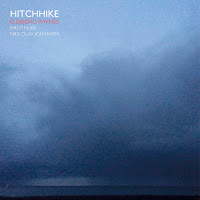 Eldbjørg Raknes is one of the most creative artists in a scene that keeps offering more and more innovative vocalist every year. She is a singer-songwriter, free-improviser, musicians who writes songs for children and performs before babies and an associate professor at the NTNU University in Trondheim. Her new EP, Hitchhike, continues her work from last year live album, Possibly In Time, with the collaborative trio of fellow vocalist and former student Kirsti Huke and guitarist Nils-Olav Johansen, known from the group Farmers Market. All add electronics to their arsenal.

Each of the four new songs offers a distinct sonic experiences. The vocals of Raknes and Huke are only one ingredient in the urgent and noisy “Kaedeåværlik?” soundscape, distorted, processed and multiplied. Raknes' dark, evocative delivery is at the center of the gentle, suggestive “Did you hitchhike with an eagle?”. “I need new fingerprints to could call me me” 's highlight is Raknes' and Huke's chanting the song title as kind of cryptic mantra amid an electric, disturbing storm. “Do you have something nice to tell me?” expands this vocal strategy, this time as an innocent, touching plea. Provocative and beautifully strange.