Colour Out Of Space Festival: There still exists adventurous music 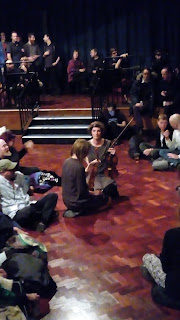 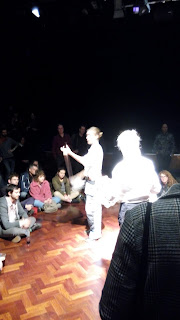 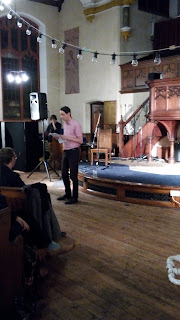 During the flight that took me to England and all the way to Brighton, there was a song stuck in my head. It was Mississippi Fred McDowell's blues classic 'You Gotta Move', famously covered by the Rolling Stones in the early 70's. This great song being a hymn to the need of constantly evolving and not sticking to your small or big, consequential or not, accomplishments, I found it a perfect match for my expectations from the seventh edition of Colour Out Of Space Festival which was held in various venues across the vibrant city of Brighton.

A festival is always a different case than organizing the program of, let's say, a venue. It must have a concept, a central idea behind the choice of the artists. It must - kind of at least - impose on us, the attendants, some questions that need to be answered and some ideas that give us food for thought. After a three year hiatus the COOS fest was back and with a lot of the above. 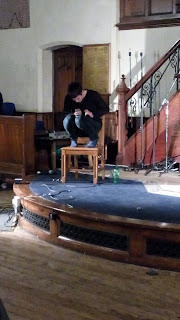 Even its own existence as well as its choice of artists, poses right from the beginning, serious thoughts about music, or art in general, that stands on the margins of what we call normality, or what we even call music. Brexit is a very recent fact that looms above everything in England these days and one of the threats that it presents is that there will be no more funding for people, organisations and festivals that choose to turn their back (and present very good reasons for that) to the mainstream.

In an imaginary society (that has yet to come) art would come from the people and for the people. Until then, in the capitalist societies we all reside, the taxpayers money should find a way to support art and especially free thinking and experimental art. It is imperative and we don't ask for it, we demand it.

The good people of the COOS festival, among a general feeling that this could be the last edition of the series, did a great job of putting together tight and compact performances over all three days of the events. The people who attended the events (not the usual hip crowd you'd expect - thankfully) did not suffer from the usual “where to go, what to see in so little time” disease of all festivals.The atmosphere was relaxed and every day of the weekend there was new merchandise on the tables for all of us who still love to buy music directly from the artists...

On the first day of the events, Friday, the duo of artist and performer Lina Lapelyte and musician Angharad Davies went off the stage and stood, holding two violins, in the middle with the crowd, in total silence, forming a circle around them. It was a circle of anticipation. Part performative and part musical their show had theatricality and was full of energy. The performative elements were more clear the moment they put down their instruments and rushed around the theater to take positions again.Their half hour performance had the urgency of playful improvisation and made us wanting more.

Cassis Cornuta made himself one of the most remembered figures of the weekend. And most probably not for his performance. During every show that interested him he was first by the stage so he could check what was going on. His eyes had the glare of a small child eager to listen and learn, curious about everything.This is what we need, people who are willing to listen and investigate. On the other hand his show was the opposite. Hidden behind a wall (both literally and practically) of noise made by huge loudspeakers, he had no eye-contact with the rest of us. His performance seemed unwilling to communicate with the audience, like it was meant to be only for himself. Maybe it was.

Which is not what happened with the playful quartet of Clappy Shandy Dads. The four men (Dylan Nyoukis, Julian Bradley, Alex Drool and Luke Poot) performed sitting down behind microphones, found objects and tools. Like a loud, noisy rock band in the beginning, when they started rolling and incorporated tons of humour, they were transformed into crooners of the other side. With voices hidden behind feedback like a poly-rhythmic tree of sounds that spread inside the theater as time went by, conventional notions of music were destroyed and a snare drum provided the rhythm section.

Later that same night I expected a lot from Matt Krefting's closing of the first day. He did not deliver, at least for me. He based his performance in heartwarming elements: a cassette player and pre-recorded sounds. The air of nostalgia didn't quite work.

The second day of the festival began with one of the unknown and definitely not expected thrills of the weekend. Despite the nasty weather the atmosphere of One Church was cozy and relaxed. On the other hand Michael Barthel looked nerdy and nervous in the beginning. His phonetic word poetry was loud, sometimes rude, never ugly, and demanded our full attention. He experimented not only with the words (do you speak German?) but also with the tone of his voice which was fragile and angry at the same time. Driving his voice to the limits, he did the same with the audience that filled the church. The audience endured his attack, so did his throat.What a wonderful performance.

Later in the evening all the shows were given to artists who practice around Fylkingen of Stockholm.I must admit that it seemed an erratic choice when I first thought of it. On the other hand as neoliberal politics keep on marginalizing free thinking art, we need to return to the basics and one of them is, certainly, to keep giving a voice to all the institutions that are still trying to fight the power with what they've got.

The performance act duo of WOL (Wenche Tankred and Lovisa Johansson) entered the theater ready to battle the crowd and themselves. Using only wrapping tapes, they created room for their performance (not on the stage but within the crowd) and made the tapes take numerous shapes and sounds like noise or string instruments.Their dual physical actions were in perfect co-ordination full of humor and ready to mock themselves at any time. By transforming something so meaningless into everything they pointed out the as-serious-as-your-life aspect of a 21st century performative Arte Povera. Later Kent Tankred was a little disappointing. Manipulating knobs and buttons he seemed as dull as this gesture shows. Even the black, angry and throbbing sounds that emerged from the speakers had nothing new to offer. Not that I did not like it, but I expected the envelope to be pushed a little bit further. Johannes Begmark closed the second day accordingly. Thankfully for all the artists no-one was to perform after him that day and how could anyone? From the very first second his performance was based in amplification and his body. Eating, drinking and talking to us, we could hear the small noises inside him from a small microphone stuck really deep in his throat. It seemed like he was trying to transmit to us his inner music, his heart beat and the harsh noises of several physical acts. He transformed his body, by making all of it's sounds audible, into an orchestra of uncontrollable noises. He struggled for every second of it's performance and endured driving himself to the limits. A holistic body and audio experience.

Early on Sunday, the midday the panel, with Wire's Derek Walmsley presenting, consisted of leading producers from Intenet radio who discussed free-form radio in - as Walmsley put it - the golden era of radio today. It was exhilarating and optimistic to catch the vibe of radio producers talking about the transformation of radio, in 2016, into a medium that transcends new music all around the world and the power of this fact.

Later on, being a little late, I hurried into the main theater to catch the Austrialian born Phantom Chips democratically giving way to the audience to perform along with her. Her wearable noisemakers began giving shape to some kind of primal electro sounds before, with a little help from her new made friends in the audience, turning into a rhythmic gargle that took shape into an atonal noise orchestra. I was puzzled by the control she seemed to have in a situation that seemed chaotic and unpredictable. Probably that was the point and everybody enjoyed it.

On the other hand Birgit Ulher's performance was static and not so funny. It wasn't meant to be after all. Τhe extended techniques she used for her trumpet - as long with some pre-recorded sounds - did not quite work and seemed like a summary of her work for the last ten years or so and not the new thing a live performance has to offer.

Of course presenting John Cage's masterpiece 'Indeterminacy' obviously is not a new thing. But with a work so open to new interpretations I was eager to check the ideas of Stewart Lee as a narrator and Steve Beresford with Tania Chen as performers. As I have learned from listening to Cage's works, I expected nothing and everything. Lee as a narrator had the warmth and humor of the original and at the same time made it his own, unique play. The interplay of the two performers allowed no pauses or delays.The forty randomly chosen passages flowed like a flawless dada performance proving that this work hasn't aged a day at all. Mark Durgan with his white hair - one half of noise troublemakers Olympic Shit Man - also hasn't aged at all. His radical thinking towards art was again transmitted along with co-conspirator Andy Bolus. They promised velocity, they delivered. They promised density and they definitely succeeded. They did everything without resorting to any of noise's old tricks. Partly rhythmic and partly chaotic the provided the perfect soundtrack for me to relax and stop feeling myself at the same time. If you don't get me, that's fine, this was beyond any description, just go and get the albums.

The choice of Iancu Dumitrecu's music as a closer declared loudly the adventurous character of the festival and the will to take risks. I envy that. But with risks there's always the chance to fail. Which was the case here. The grandeur of Dumitrescu's music and his commanding presence did not seem fit for the occasion. In a small scale theater like this with musicians of a communal thought and practice, the explorations of this music didn't get through-at least not to me. It's a pity he also had with him some fine musicians like Alex Drool, Cosmin Postolache and Yoni Silver. I'm pretty sure that if there will be a next edition of the festival, they will certainly please Beckett by failing again and even better!

Closing all the above I must admit that my biggest fail during this wonderful weekend was not showing up to catch Tyler Hubby's documentary about Tony Conrad. Word got out it is good, so go check it out. In any case Conrad's music will reverberate forever.