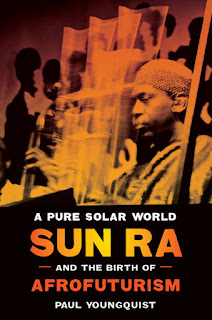 A Pure Solar World: Sun Ra and the Birth of Afrofuturism is a new book by Paul Youngquist published by the University of Texas Press, part of their ongoing “Discovering America” series. Not a biography as such (for that there is always John Szwed’s excellent Space is the Place: The Lives and Times of Sun Ra), but an attempt to explain both the mythology behind Sun Ra’s work and to situate his output in a wider cultural context, both of which Youngquist does very capably.

Youngquist is a professor in the English department at the University of Colorado Boulder as well as being Associate Chair of Graduate Studies. His prose is generally well constructed, interesting, and creative enough to be engaging. He does a good job of exploring Sun Ra’s wide ranging interests in occult and non-mainstream ideas and shows how they influenced his thoughts and practices. And at under 300 pages (not including footnotes, bibliography, and index) the book is a manageable size.

Perhaps my favorite part of the book, certainly the part that was most unexpected, is where Youngquist draws comparisons between Sonny and the great mystic William Blake, something I had not previously considered.

"Blake’s unshakeable devotion to creative autonomy in his own historical moment of revolutionary fervor"… aligns Sun Ra’s poetry with a potent tradition of cultural insurgence. Like Blake, Sun Ra constructed an ideological architecture for his poems that enhances their claims. A myth sustains their meanings. And like Blake, he worked as an artist outside the industry that would claim his labor. Blake, too, self-published his poetry—engraving, printing, and illuminating his books by hand; selling them to friends and fans directly, and living in obscurity for his reward" (p. 77).

In the same chapter and throughout the book, Youngquist delves into an aspect of Ra’s output that is often over looked, his poetry and other writings. Sun Ra’s writing is often as oblique as his music, engaging in extensive wordplay and subterfuge, but Youngquist carefully unpacks many of his poems showing how they contain clues to the mythology that was so central to Sonny’s music. Youngquist also delves deep into the broadsides and other writing that Sun Ra left behind.

A large part of the book deals with placing Sun Ra in a broader cultural context. Like everyone else, even those claiming to be from Saturn, Sun Ra didn’t exist in a vacuum. He lived and worked and struggled as a black man in America, which has never been easy, even today. Youngquist does a solid job of showing how Sun Ra was influence by the world and how the world was influence by him.

My only real complaint about the book is the few places where Youngquist takes the liberty to imagine conversations for which we have no exact record of what occurred. It happens in three main places: a conversation between Herman Blount (as he was then known) and the judge when Blount didn’t report to the camp for conscientious objectors during World War II, a conversation in Washington Park (Chicago) between Ra and another man, and again at the end of the book when Youngquist imagines Sun Ra’s last words from his hospital bed in Birmingham. These are all footnoted and documented as imagined conversations that cleave as closely as possible to the historical record, but they still bothered me, no matter how historically accurate they may be.

As an object, the hardcover is a nice book. An uncredited jacket design in reds and oranges against black is very pleasing, but the book is most handsome without the jacket: beautiful yellow cloth with a simple font on the spine for the title, author’s last name, and the publisher’s logo. The yellow cloth is especially nice against the black endpapers.

Overall, A Pure Solar World: Sun Ra and the Birth of Afrofuturism is a good read, and one I imagine any Sun Ra fan would enjoy. Even if you’re not into Sun Ra, this book might help you at least appreciate his work. While maybe not an “essential” read, it is well worth your time to check it out.
Paul on Wednesday, January 04, 2017
Share